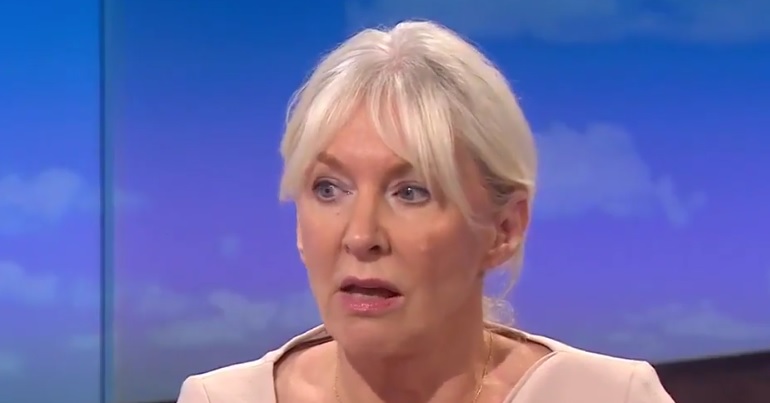 Nadine Dorries has taken racism to a whole new level while trying to dig herself out of a hole. The Conservative MP attempted to explain why she’d ‘mixed up’ two people of colour (again). And her excuse just made matters even worse.

Dorries took to Twitter to call out Novara Media‘s Ash Sarkar on 4 February. Sarkar had appeared on The Andrew Marr Show a day earlier, arguing that the notion Labour is “misty-eyed” on Venezuela is a “myth”. Dorries clearly disagreed:

In what can only be described as an escalating Tory social media car crash, the Tory MP Nadine Dorries has now confused Ash Sarkar for Labour's Chingford candidate Faiza Shaheen, who don't even look vaguely similar. pic.twitter.com/MgM9MFCayD

But, as Owen Jones pointed out, Dorries “confused” Sarkar with Faiza Shaheen, Labour’s candidate for Chingford, in her tweet. She has since apologised, although to BBC Newsbeat rather than the two women. Dorries first claimed that the gaffe was due to only seeing Sarkar in a “tiny video on my small phone screen”. She then offered the following absolute corker:

It was the accent I was basing the identification on via my phone as I thought I recognised the voice and it sounded like Faiza.

So, Dorries doesn’t only appear to have trouble seeing the difference between people of colour. She also seems to think they all sound the same too.

As Sarkar explained to the Independent, this isn’t unusual behaviour from the Conservative MP:

Apparently I'm racist because I think Chuck Umunna looks like Chris Eubank ?What would I be if I said he looked like someone who was white??

Sarkar also argued that the gaffe is indicative of a wider problem in Dorries’s party:

It’s no surprise she doesn’t feel obliged to apologise, given the party’s repeated inaction when we’ve seen similar incidents in the past. Racism is endemic in the Tory party.

Some members of the Conservative Party also appear to agree with this. Conservative peer Sayeeda Warsi mocked Dorries on Twitter for the mix-up. And on the same day, the peer also called out her party for not tackling Islamophobia in its ranks:

And on & on it goes ⁦@BrandonLewis⁩
This new generation @Conservatives⁩ not only thinks “Paki” is acceptable
but Muslims also have 2 give up their religious text to “prove” they are against terrorism
Methinks that Independent Inquiry into #Islamophobia is long overdue 😔 pic.twitter.com/tyovPUrALN

But, as Sarkar says, “racism is endemic” in the Conservative Party. So it’s hard to imagine that the independent inquiry Warsi is calling for will ever get off the ground.