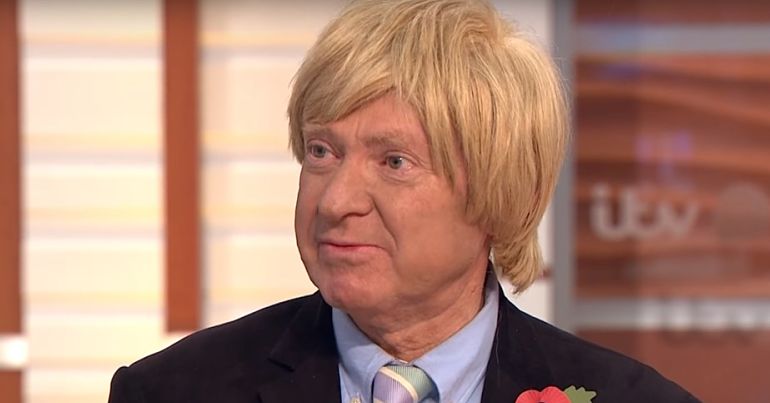 On 12 July, Conservative MP for Lichfield Michael Fabricant tweeted a shockingly racist image attacking London mayor Sadiq Khan. There are now calls for Fabricant to be suspended by the Conservative Party.

Fabricant tweeted the following image before quickly deleting it:

The now deleted tweet by @mike_fabricant is gratuitously racist and the Tories have to suspend him now pic.twitter.com/pfIfmQqY1o

The image contains an inflatable pig seemingly having sex with an inflatable Sadiq Khan, and Donald Trump laughing in the foreground. Above is the tagline:

For those unsure of the image’s significance, journalist Owen Jones explained:

For those claiming not to know why this is racist, a cartoon of a Muslim – or a Jewish person for that matter – having sex with a pig is deliberate and calculated racism.

And Fabricant is now facing the mother of all social media backlashes:

Appalling – Tory MP @Mike_Fabricant shares a picture of Sadiq Khan as a pig i.e. it is him being a Muslim that is somehow relevant?

FYI: Islamophobes similarly use the pig as a means of attacking Muslims e.g. bacon at mosques.

Can’t believe @Mike_Fabricant tweeted that vile, islamophobic image of @SadiqKhan – thought it was a spoof. He has just deleted it. Describes himself as an “MP dude” in his twitter profile but is clearly an “MP idiot”. @SayeedaWarsi is right on this – her party has a problem.

This is disgusting, racist stuff @Mike_Fabricant – you should be ashamed of yourself.

The assistant secretary general of the Muslim Council of Britain argued that this is not the first time Fabricant has crossed the line:

Apparently Mr Fabricant also misrepresents a Times article claiming that 100 anti-Jewish attacks are committed by "intolerant Muslims" when no such claim is made in the article. pic.twitter.com/I0XCIpNnDb

Tory MP Michael Fabricant has tweeted an Islamophobic image of Sadiq Khan, yet high and mighty Tory MPs like James Cleverly have remained silent – but are quick to condemn Labour over antisemitism

Fabricant’s tweet comes at a time when allegations of Islamophobia within the Conservative Party are rife. Writing in the Guardian, the party’s former co-chair Sayeeda Warsi argued:

Words without action are at best flannel and at worst represent simple contempt … There should be a forensic, wide-ranging and transparent inquiry into Islamophobia in the party. The process should be published, those who are found wanting should be publicly named and membership withdrawn.

And she cut an exasperated figure in the wake of Fabricant’s tweet:

And on and on it goes 🤦🏽‍♀️
There will be an inquiry- it’s only a question of time.
The problem in my party is too widespread for there not to be.
The question is how much damage we will do to our reputation in the meantime as we drag our feet @Conservatives https://t.co/NYTz0dwIzX

Surely Michael Fabricant must be suspended by the @Conservatives https://t.co/p1KfbMf86Q Or does their 'respect' policy mean absolutely nothing?

This is abhorrent. Tory members, the former chair of the party @SayeedaWarsi , and the @MuslimCouncil have all called for an inquiry into Islamaphobia. If @BrandonLewis respect pledge means anything, Michael Fabricant must be suspended immediately. https://t.co/x0fxwnfH3g

Although some saw it as nothing new for the Conservative Party:

Michael Fabricant upholding the Tories' fine tradition of anti-racism and good taste . One of the Tories' " I'm clearly a foul ignorant bigot but I try to mask it in quaint eccentricity " MPs. Like Rees-Mogg, Chope,and several others. Truly revolting man. https://t.co/ZUZwU3PDpy

And others wondered what the outcry would be like if a Labour MP had tweeted something similar:

Dear @BBCNews and the British media in general. Below is Tory MP, Michael Fabricant’s tweet featuring a pig mounting a Muslim. I can only imagine how this would dominate the news cycle, if a Labour MP had tweeted the same thing about a Jew. I await your indifference. #Fabricant pic.twitter.com/C5B6siBDzW

I did not even see there was a face on the pig. As soon as I saw there was, I deleted it. I did it within two minutes, but my fault was not checking it closer on my iPhone first.

Having been on TV criticising the blimp, I thought it was just a simple joke on that. I am not Islamaphobic [sic] and I liked Sadiq Khan when I knew him as an MP. Moral of the story, don’t examine a picture on a small screen.

This absolutely does not wash. A sitting MP cannot tweet something as abhorrently racist as this image and claim he didn’t realise what he was doing.

The Conservative Party must sack Fabricant and launch a full investigation into Islamophobia in the party. If it doesn’t, the whole party will be complicit.