It’s clear why this audience member was bigging up Theresa May. Look who she works for. - Canary 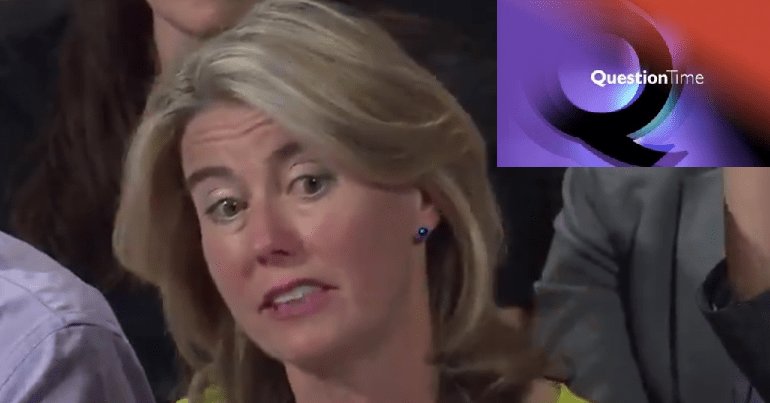 It’s pretty obvious why audience member Anna Firth was bigging up Theresa May on the 13 July edition of BBC Question Time. Look who she works for:

This week’s Tory plant – meet Anna Firth. Twice stood – and failed – to be an MP and is now a Tory councillor in Sevenoaks #bbcqt pic.twitter.com/mle9mgbjSs

Working for the Conservative Party

Speaking on Question Time, Firth called for the country to “come together” behind May [about 1.00]. Viewers quickly noted that Firth is a Conservative councillor in Sevenoaks. She’s also tried to go further. Firth stood to become the Conservative MP for Erith & Thamesmead in 2015, after trying to contest Rochester and Strood the year before. She also writes for flagship Tory website ConservativeHome.

The Conservative councillor has been pictured with Question Time host David Dimbleby:

Absolute rubbish. I asked producer afterwards if it would be possible to have picture with Dimbleby as I am fan of QT https://t.co/KUhbzah57V

I actually campaigned for Brexit… I’ve read the three pages of the Chequers accord. And I approached it thinking I’m not going to agree with this, but I have to say… I wanted to stop European laws automatically becoming the law in this country. This deal does that… I’ve read it, and I’m a lawyer, and that’s what it [seems to be saying] to me… As a Brexiteer, it seems to me – it’s not perfect… we have to come together.

But the European parliament has already rejected May’s plan, suggesting parts of it were not “credible”. So it might be difficult to “come together” over a plan that’s already failed.

On social media, Firth responded to allegations that she’s a ‘Tory plant’:

Nothing. I just applied to go on like everybody else. https://t.co/jXcjVAQ6R1

The thing is, people working for the Conservative Party appear on BBC Question Time regularly. Last week, an audience member calling for NHS ‘reform’ was outed as a Conservative candidate in the 2017 general election, and the Vote Leave campaign chair for North Norfolk.

As well as Firth, a number of audience members backing the Conservatives have turned out to be Tory councillors in recent times:

# And here's allll their friends… # pic.twitter.com/oHsSDggZrP

One high-profile case saw an audience member brand claims that disabled people have died due to government policy as “inflammatory rubbish”. Yet there were 30,000 excess deaths in 2015 alone in the name of Conservative austerity, according to an Oxford University report. It all makes sense when you find out the audience member was Chris Stevens, a Conservative councillor from Horley.

Clearly, May’s party needs to get some genuine supporters willing to make their case. A good start would be people who aren’t in fact sitting Conservative politicians. It’s embarrassing.

"As a Brexiteer, it seems to me that it's not perfect, there are other things I wanted, but we have to come together"

This audience member is supportive of the White Paper, as she thinks it delivers what she wanted from Brexit #bbcqt pic.twitter.com/Pl1Z5MjvdT