A protester tells Rupert Murdoch exactly where he can stick it, live on Sky News - Canary 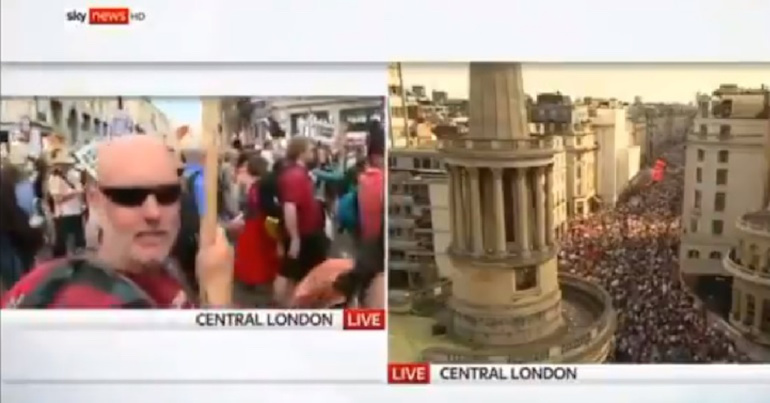 Tens of thousands of people took to the streets of London on 13 July in resistance to Donald Trump. And protesters weren’t about to let the US president’s media buddies off the hook either.

‘Murdoch can fuck right off’

Rupert Murdoch’s Sky News was at the protests. And when it tried to get a comment from one protester, he immediately said:

No, no, no. Not Rupert Murdoch. Fuck right off.

Scouse Legend tells Rupert Murdoch to "F**k right off" live on SkyNews at the #TrumpProtest !

The media of billionaire tax avoider Rupert Murdoch is a bastion of the right around the world. In the UK, football fans have long boycotted the Sun for its disgusting coverage of the 1989 Hillsborough disaster. And in the US, Fox News has essentially turned into a propaganda outlet for Donald Trump – bolstering and amplifying his bigoted words and policies. That’s why the lies of Fox News have escaped Trump’s attacks on US media outlets.

As the Media Reform Coalition highlighted [p7] in 2015:

In short, Murdoch plays a massive part in keeping the British media undemocratic and tilted significantly to the right.

Just this week, the UK government gave Murdoch permission to buy the part of Sky that he doesn’t already own – as long as he sells off Sky News. But in the meantime, Sky News is still part of the Murdoch empire. And as long as it continues to have a close relationship with Theresa May’s Conservative government, there seems to be little hope for truly balanced news.

End the corporate stranglehold over media and politics

As the video above showed, protesters in London aren’t just standing up against Trump. Many of them are also standing up to the dominant corporate influence in both the media and politics, which helps to keep people like Trump in power.

And they’re standing up in numbers.

People’s anger at Trump is very real. And it’s totally justified. He has emboldened white supremacists and neo-Nazis by comparing immigrants to poisonous snakes, smearing Mexicans and other Latin Americans as murderers, drug dealers, and rapists, and sanctioning the horrific treatment of immigrant children.

Trump is not welcome in the UK. And neither are his backers in the corporate media. As the protester above rightly said, they can fuck right off.

– The Canary actively invites its readers to question everything they read. So please follow the hyperlinks we reference. And always search for more information if unsure. But if you believe in the importance of independent, grassroots media in the fight against corporate propaganda, please consider supporting us.

– Also check out the Media Reform Coalition for information on Rupert Murdoch’s role in the UK media.