Children have been numbered and caged. And these companies are profiting. - Canary 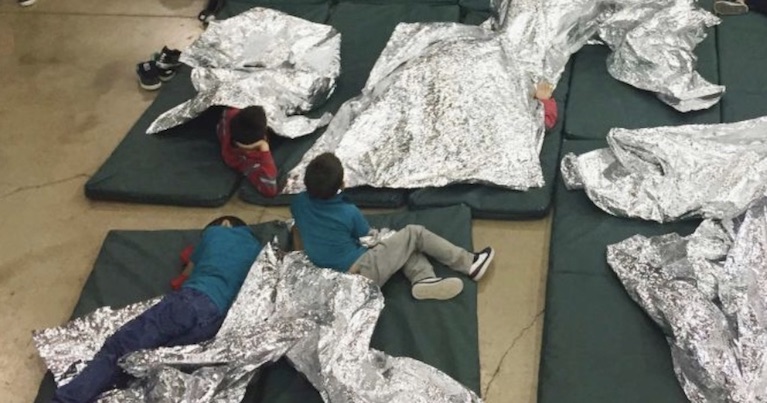 Correction 11am 21 June: This article originally contained a tweeted image that claimed it depicted a child had been numbered on his shirt. We were alerted to the fact this was not true and the tweet has been removed. However, alternative evidence was added to the article of children being numbered.

As Donald Trump’s “zero tolerance” immigration policy continues, border officials have ripped nearly 2,000 children from their parents at the US border in just six weeks. International outrage is growing. And as the number of detainees rises, the US needs more facilities and more staff to enforce this brutal policy. In this context, activists are naming and shaming the companies which are profiting from this tragedy.

Disgusted? Then name and shame.

There’s big profit in detention. But as Bloomberg reported:

as outrage grows over an immigration policy that’s separated thousands of children from their parents at the border, activists have begun to name and shame the private companies that stand to benefit from expanding detention facilities for children.

Social media consumer activists at Sleeping Giants and Grab Your Wallet led the way in speaking out:

This is a concentration camp for children.

Who is the tent manufacturer willing to profit from this?

Who is the bed manufacturer?

Who is the company willing to handle the data?

Who is the food supplier?

Who are the other companies willing to detain children for cash? https://t.co/uMcho0Z7N6

The key players profiting from this heartbreaking situation are:

Since 1995, General Dynamics has faced $280.3m in penalties for 23 misconduct cases. And the company doesn’t just profit from caged children. According to Corporate Watch, in 2016:

the Pentagon authorised the selling of smart bombs to Turkey, in a deal worth millions of dollars… US companies ENF and General Dynamics have been awarded the contracts to provide the BLU-109 bombs.

GEO Group, meanwhile, was founded by a former FBI agent – George Wackenhut – and staffed by those who previously worked for the CIA, the FBI and elite military forces. In 2010, it merged with Securicor and rebranded as G4S Secure Solutions. There have been several inquests into deaths in GEO custody.

According to the Daily Beast, MVM has also been plagued by scandal. There are further concerns about the speed that companies like MVM are now recruiting to staff the current ‘crisis’:

With companies like @MVMINC staffing up at lightning speed to handle the influx of children taken away from their parents and ICE operating without oversight, this will likely continue to happen. https://t.co/gXTcZErMrv

It is mind-blowing that those types of industries would be even considered with respect to the care of children. They’re not equipped to be able to do it. Would you want your child to be dropped off in their hands? I know I wouldn’t.

Profiting from the suffering of children

Even before Trump’s ‘zero tolerance’ policy, by 2015 50% of the detention facilities used by US Immigration and Customs Enforcement (ICE) teams were privately run. By 2017, [pdf] ICE used private facilities to hold 73% of detained immigrants. And according to MotherJones, this is set to rise:

Immigration and Customs Enforcement is forecasting that next year will bring a 23 percent increase over the already historic number of people it locked up daily in 2017.

As it also explained:

That’s good news for companies like CoreCivic and the GEO Group, which take in millions of dollars from ICE to detain people awaiting immigration or asylum hearings.

Several board members of @GDMS, one of the known contractors working under the new policy separating children from their parents, are also on the board of @AbbottGlobal, makers of children’s products @pedialyte and Similac.

Meanwhile, Sleeping Giants is calling out advertisers on pro-Trump media platforms like Fox:

This policy has been called barbaric by Amnesty Int’l, the ACLU, leaders of our allied countries, 4 First Ladies and politicians on both sides of the aisle, yet Fox continues to dehumanize immigrant children.

How can any advertisers continue to support this rhetoric?

Amnesty: This is “torture”

Amnesty International called this a “spectacularly cruel policy”, because:

frightened children are being ripped from their parent’s arms and taken to overflowing detention centres, which are effectively cages. This is nothing short of torture. The severe mental suffering that officials have intentionally inflicted on these families for coercive purposes, means that these acts meet the definitions of torture under both US and international law.

An audio recording emerged showing how distressed the separated children are and, a woman was heard saying:

Keep this number. Don’t lose it, you hear? Good.

The children have little comfort:

Reporters given access to a facility at the southern border, where the US holds arrested families, find traumatised children inside cages without toys or books and with large foil sheets for blankets. Photo: AP https://t.co/UDnZlECbQy pic.twitter.com/JA3OviNYp8

Images of these children in cages are shocking:

Children are being held in cages at the border in #Texas, separated from their parents. One cage was found with 20 children inside. Read more: https://t.co/v4991tPfJK via @Telegraph

'It reminded me of going into an animal shelter.' — Border Patrol is detaining children in cages. pic.twitter.com/l70JOQo1ks

And yet companies are profiting from this misery. From the cages to giving space blankets to traumatised children – it doesn’t take much to see that profit runs ahead of care in these facilities.

These are people at the border, not criminals. As Amnesty also explained:

Many of these families come from countries experiencing generalized violence and grave human rights violations, including Honduras and El Salvador. This is a flagrant violation of the human rights of these parents and children and is also a violation of US obligations under refugee law.

The violence they’re escaping, meanwhile, has its roots in decades of US interference.

And beyond the human rights violations, there’s another important point to consider. As Corporate Watch explains:

Immigration policy isn’t really about controlling migration, it’s about making a show of control. It is a spectacle, an emotional performance.

The Trump administration’s ‘control show’ is well and truly out of control. But the world is watching. And we need to keep the pressure up. Because to profit from this situation is indefensible.