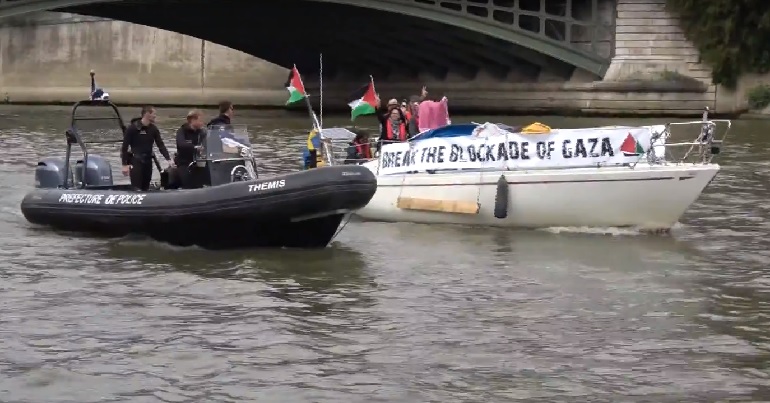 On 17 June, the prefecture of Paris stopped two humanitarian boats destined for Gaza from docking. And a video from activists caught events as they unfolded.

In 2010, Israeli commandos stormed the Mavi Marmara ship, killing nine people attempting to deliver aid to the people of Gaza. Since then, ‘freedom flotillas’ have tried to ‘break’ Israel’s blockade of the strip.

The boats making up this year’s ‘freedom flotillas’ are: Al Awda (The Return), Hurriya (Freedom/Liberty), Falestine (Palestine), and Mairead (named after a Nobel Peace Laureate who sailed against the blockade previously).

A short clip from video-reporter Chris den Hond shows the boats being detained and ‘harassed’ by water authorities.

The video states that French police confined the boats in a lock for three hours.

Claude Léostic, the coordinator in France of the Gaza flotilla, explains:

These boats are part of the international flotilla for liberty that almost every two years tries to break the blockade of Gaza.

After being released from the lock, the video says the police threatened the flotilla members with fines for the ‘political’ banners on the boats. These showed the phrases “SHIP TO GAZA” and “BREAK THE BLOCKADE OF GAZA”.

These policemen who are harassing us since this morning told us nonsense about the speed of the boat; they tried to force us to go faster, then to slow down, then go this way, then the other way around.

The Al Awda was also boarded by the German coast guard on 23 May 2018.

According to the website Right to a Just Future for Palestine, this was done:

at the orders of the German Ministry of Interior. They collected all the passports on board, wrote down everyone’s personal data, searched the vessel thoroughly, asked for detailed information about ports of call along the way to Gaza.

Not every stop has been hostile, though. Green MEP Keith Taylor, for example, expressed his solidarity with the flotilla and the people of Gaza. And his home town of Brighton hosted Hurriya earlier this month.

Israel, a “rogue state that massacres”

If states and governments do not put the necessary pressure on Israel – which is a rogue state that massacres, that kills children, nurses, journalists – if states are doing nothing, then it’s the civil population – we the citizens – who must take things in their own hands and say: ‘enough is enough, we cannot allow this colonial violence to continue. We want to show our solidarity with the Palestinian people of Gaza.’

We have noticed an extremely serious change in behaviour of the French state. Here, they forbid boats with a peaceful goal.

The flotilla has since made its way to Portugal. For other upcoming ports, see here.

– Finally, write to your national or local politicians to share your concerns and ask where they stand.