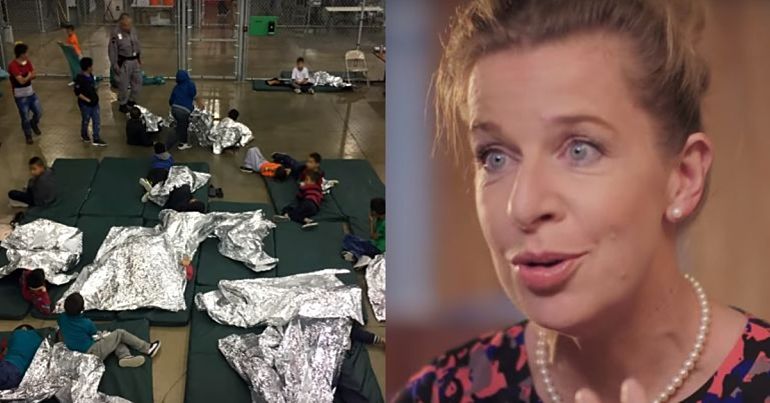 For the last few weeks, Tommy Robinson‘s fans have portrayed themselves as bastions of children’s rights. But the news that Donald Trump’s immigration policy is tearing children away from their parents has decidedly changed their tune.

It’s almost like it was never really about children’s rights after all.

Judge Geoffrey Marson jailed Robinson – real name Stephen Yaxley-Lennon – for potentially prejudicing an active court case. Robinson’s acts could have stopped justice being served for the hideous crimes the defendants were being accused of.

Katie Hopkins – the aspiring queen of the ‘alt-right’ – took to Fox News to try and defend Robinson.

She also sent a warning to anyone who had the temerity to suggest that racism played a role in her actions:

Tommy warned us about these rape gangs.

You laughed and called him a racist

Tommy will die in prison at the hands of these gangs.

You will laugh and say it served him right

Then you will remember YOU have a daughter #TommyRobinson https://t.co/CkT9s3UA5i

But when responding to the news that children in Trump’s detention centres were wailing for their parents, Hopkins changed her tune. Apparently, children’s rights were not quite as important when those children were from Latin America.

Breaking news: if you do not try to cross the border illegally, you will not be separated from your children.

Live video footage from the White House of President Trump debunking the claim that the US has concentration camp-like centers for Central / South American migrants’ children – https://t.co/0iTR2firS2

There's an audio tape of a kid crying. This means we must erase all borders.

Tommy Robinson's son is crying himself to sleep every night, and that he wants to do something bad so he can be sent to prison to be with his dad

Where is the mainstream media sob stories about this?

Tommy Robinson is in prison for the crime of reporting on child grooming gangs pic.twitter.com/NmqD2YqBGv

… to not giving a crap about the many hundreds of children separated from their parents by Trump:

Trump is making me proud?

Thankfully, this hypocrisy was not lost on people:

I'm beginning to suspect their concern with Asian child grooming gangs wasn't because they care about children. https://t.co/gj5MQNvZl7

Does that mean we can close tommy robinson too! His kid was crying too wasn’t he?

Unsurprisingly, the far right has a very simple solution to the detention of children in the US:

‘Don’t come to America!’ Why didn’t anyone else think of that? The children are saved!

But if people like Hopkins bothered to do an ounce of research, they’d see the answer isn’t actually that simple. Families don’t just try and get into the US because they feel like it. Many are fleeing poverty and violence. And America has played a strong role in creating the insecure conditions which lead to migration from Central America. HuffPost, for example, has described how:

And this is not just true in the Americas. A study by Left Voice found that:

the largest sources of immigration to Europe are precisely the countries that suffered imperialist oppression in recent decades.

This little boy was taken from his parents and has been assigned a number #47 which was placed on his chest and arm.

The alt-right brigade are really on their own this time. And the flexible principles they have displayed over the past few weeks show that they will do anything to further their agenda of racism and fear. But then, what else did we expect from them?