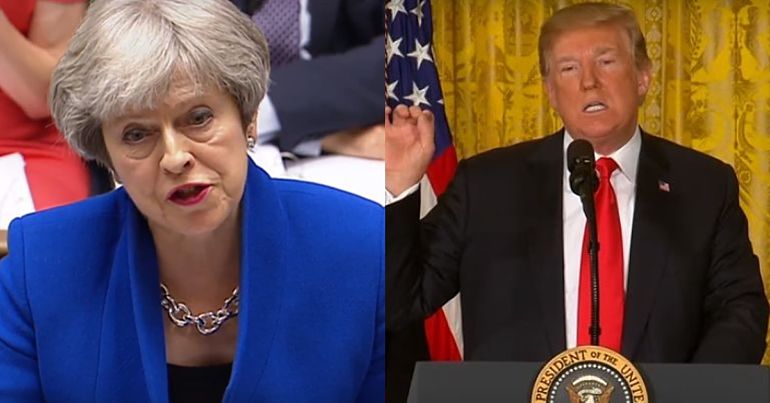 On 20 June, Theresa May reiterated during Prime Minister’s Questions that she plans to welcome Donald Trump to the UK on 13 July.

Trump’s ‘zero tolerance’ immigration policy has resulted in border officials detaining children and separating them from their families.

On World Refugee Day 2018, SNP Westminster leader Ian Blackford put it to May that this should be enough to revoke the planned state visit:

“This is wrong, this is not something we agree with, this is not the UK’s approach” @theresa_may on children in US detention centres#pmqs https://t.co/y3OmBWEJ5A pic.twitter.com/AHd1xBT6s3

Labour MP Gavin Shuker also added to the calls for Trump’s visit to be cancelled, saying:

President Trump has locked up 2,000 little children in cages and is refusing to release them unless he’s allowed to build a wall. He’s quit the UN Human Rights Council, praised Kim Jong Un’s treatment of his own people, turned away Muslims. What does this man have to do to have the invitation she has extended revoked?

But while May condemned Trump’s policy, MPs jeered as she reiterated that she will welcome him to the UK on 13 July.

People were not impressed by May’s weak reaction:

We need louder, stronger words from Theresa May on this. This isn't some minor misdemeanor… It's putting children in cages.

I cannot believe that she would make a joke at the start of her reply, absolutely appalled. This is not political, its about right versus wrong, and we are siding with the wrong. Talk is cheap and often meaningless, its action thats needed to send a message to Trump.

The fact that @theresa_may didn't show some moral backbone and condemn, with words to match the behavior of the Trump administration on the caging of crying children, I'm afraid tells us all we need to know about this inhumane, power at any price, vile PM #PMQS

Pick up the phone and call the vile toad instead.

May also said that the migrant children detained in the US “appear” to be in cages. And this didn’t sit well with Labour MP Richard Burgon:

At #PMQs Theresa May responds to questions about the caging of migrant children in the USA by saying they are being held in what “appear” to be cages. Appalling detachment from the inhumanity of her political ally in the White House. Does she believe this is “Fake News”? pic.twitter.com/pKcpuJGVrS

But unfortunately, May’s record means her weak reaction shouldn’t come as a surprise:

Actions speak louder than words .#DissolveTheUnion #ScotRef #TrumpConcentrationCamps
Look at how Mays gov is treating disabled homeless and anyone on benefits to see what a dark heart beats in a Tory chest . pic.twitter.com/lTQaLLLiVB

If you're shocked by what's happening at the US border, just remember that the UK is the only country in Europe where immigrants can be held in detention centres indefinitely.

This #WorldRefugeeDay, let's stand up against inhumane immigration policy both at home and abroad.

Trump is incarcerating innocent children, separating them from their families. And May welcoming him through an official state visit helps to normalise this abhorrent and inhumane policy.

On World Refugee Day, May could have taken a stand against this barbaric treatment of asylum seekers who are “fleeing gang violence and poverty”.

Unfortunately, she took the easy way out.