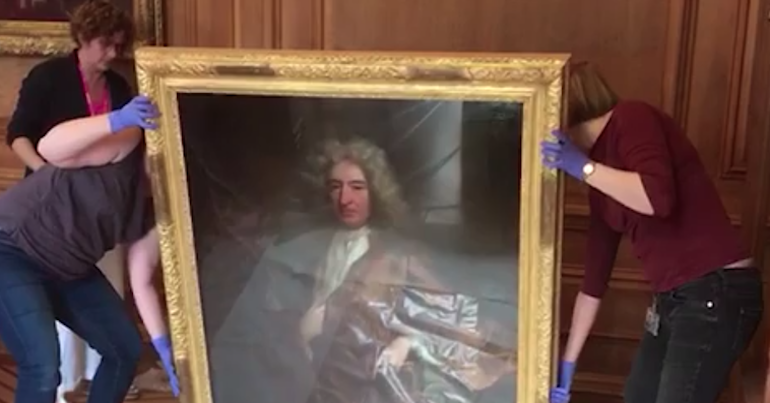 Bristol’s new lord mayor, Cleo Lake, removed the portrait of controversial slave trader Edward Colston from the mayoral office on Tuesday 19 June. The painting had hung on the parlour wall since 1953.

Colston was a slave trader who was born in Bristol in 1636.

The removal of the portrait has been welcomed by the Countering Colston Campaign, which opposes the public celebration of the slave trader. Lake, who is of mixed African-Caribbean and Scottish descent, is an active member of the campaign. The Guardian reports that, speaking of her discomfort with sharing her office with the portrait, she said:

People have wondered why the portrait wasn’t already removed from the parlour. I first noticed it when I was invited in to meet the Jamaican high commissioner a couple of years back. Having it on the parlour wall in my view sent mixed messages about the city council’s values today, which are not the same as what they might have been centuries ago in Colston’s time.

Many Bristol landmarks still bear names intrinsically linked to the slave trade. But in April 2017, Bristolians applauded the decision to drop Colston’s name from one of Bristol’s most important concert venues. Many artists such as local band Massive Attack famously boycotted the venue in the past. Some critics, however, feel that far too little has been done to remove the city’s visible tributes to slave traders.

Although some in the city of Bristol benefited from Colston’s philanthropic donations, his slave trading resulted in widescale human suffering. Between 1672 and 1689, his ships transported an estimated 80,000 men, women and children from Africa to the Americas, via the ‘slave triangle‘.

While the lord mayor’s role is symbolic, removing the Colston painting demonstrates Lake’s will to serve the interests of a city still grappling with historical denial.