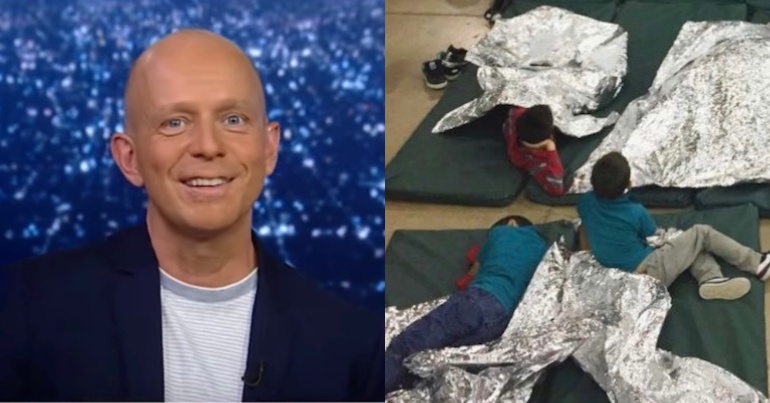 An adviser to former UK prime minister David Cameron simply laughed on his Fox TV show when a far-right guest said children ripped from their parents at the US border were actually “child actors”.

Steve Hilton was formerly a “top adviser” for David Cameron. He now hosts The Next Revolution on Rupert Murdoch-owned Fox News. Ann Coulter, a far-right lawyer and commentator, appeared on the show and shared her ‘opinions’ about the ongoing crisis at the US border.

Coulter claimed that there was a drive to “incentivise” people to come to the US, for things like “free healthcare”. She then went on to say that children who have been ripped from their parents and held in appalling conditions were:

And speaking straight to camera, she implored Donald Trump to listen to her. Trump has often boasted that he gets his ‘facts’ from Fox News.

Throughout this, Hilton failed to challenge her. He briefly joked about ‘not getting a word in’. But he was smiling. And as he tried to end the segment, Coulter claimed that:

These kids are being coached. They’re given scripts to read by liberals, according to the New Yorker. Don’t fall for the actor children.

Hilton simply smiled and thanked her for ‘getting that off her chest’.

Hilton later tried to distance himself from Coulter’s claims:

Statement from Steve Hilton (the host of this show)

"I do not endorse her comments or anything else said by anyone other than myself."

But as many people pointed out on social media, this was too little too late. Because at no point in the segment did he challenge her:

Then you need to say that openly there and then. Your silence endorses what she said if you don't dispute her comments.

If @AnnCoulter thinks these caged kids are crisis actors, then let elected officials and others in to these centers to check.

The New Yorker article Coulter refers to doesn’t seem to exist. And the author of one 2011 story that it appears Coulter was referencing called her out on Twitter, saying:

If you had 3 functioning brain cells, @AnnCoulter, you wouldn't be mentioning my New Yorker article about asylum to support your racist positions. It's not about child actors, it's about narratives demanded of adults by a broken asylum system @oliverdarcy

Even Piers Morgan interjected when Coulter shared similar views on his show, insisting:

They are not actors… They are being kept in wire cages under tinfoil.

All David Cameron’s former adviser could do, however, was laugh. And given the Conservative government’s own atrocious record in dealing with child refugees, his reaction spoke volumes.