For the second time, Theresa May gave a speech and the set started to collapse - Canary 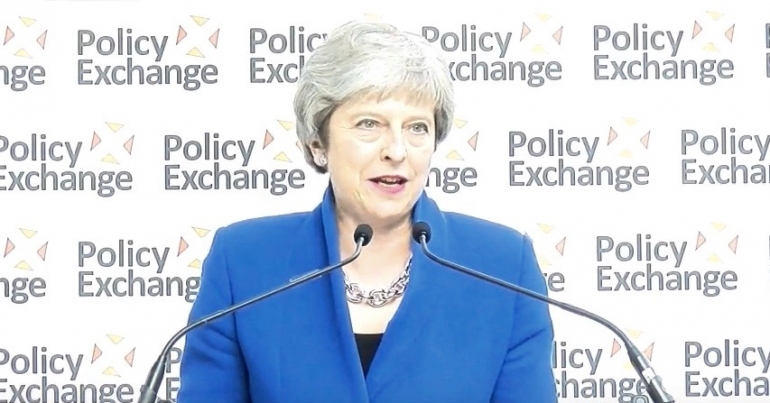 Theresa May’s keynote speech at the Conservative Party conference last year was a car crash. Embarrassingly, the letters on the backdrop behind her began to fall off. Then, on 20 June, May gave a speech at a reception for the think tank Policy Exchange. And once again, the set started to collapse:

Theresa May is speaking at the Policy Exchange reception and the set is collapsing. pic.twitter.com/zrZwxP9h3s

During May’s speech for Policy Exchange, the wind started to knock down the background set. She handled it well, but it didn’t stop people pointing out the way it symbolised the state of her government:

A metaphor for her leadership and her government.

De ja vu. Not so strong and stable.

May has recently faced a renewed conflict with her own MPs over the Brexit process – one which drove senior Conservative MP Dominic Grieve to tell the BBC:

We could collapse the government and I can assure you, I wake up at 2am in a cold sweat thinking about the problems that we have put on our shoulders.

She has also lost four cabinet ministers in the span of six months: Amber Rudd, Michael Fallon, Priti Patel, and Damian Green. And, as The Canary previously reported, Conservative Party membership now stands at less than a quarter of Labour’s.

It looks like studio sets aren’t the only thing collapsing around the prime minister.