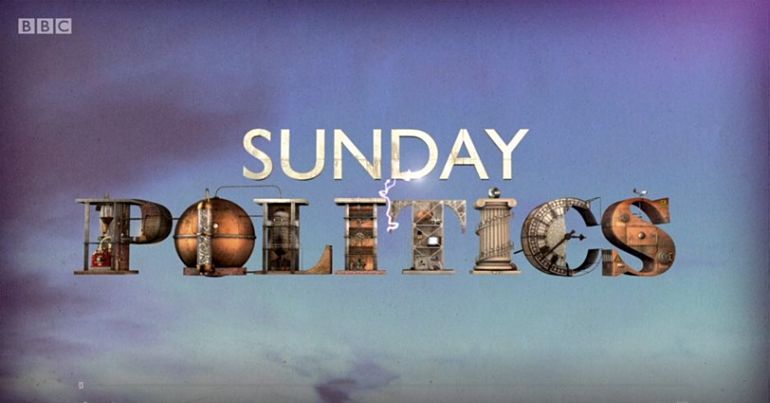 Alex Nunns, author of The Candidate, has dismantled the myth of BBC impartiality with cold, hard facts.

For the past year, Nunns has recorded the guests on BBC Sunday Politics‘ panel of experts, categorising them as either “right”, “centre” or “left”. And his findings are shocking:

For a year since the general election I've done a thread recording the guests on BBC Sunday Politics' panel of experts (https://t.co/i5dRZNZMA7). Just 10% of the guests have been from the left, 33% from the centre (encompassing the centre-left), but over half—56%—from the right.

Nunns did make the odd mistake in his lengthy quest. For example, on 16 July 2017, he tweeted:

However, that didn’t inhibit his overall argument. Because actually the Sun’s political editor Tom Newton Dunn sat in for Julia Hartley-Brewer.

In fact, journalist Isabel Oakeshott replaced Toby Young; a like-for-like replacement, I’m sure we can all agree.

The list of guests with the most appearances on the show makes for scandalous reading:

The top 5 most frequently appearing guests were:

(The most frequent left guests were Rachel Shabi & Zoe Williams, with 3 each.)

So the Sun’s political editor has appeared on 20 shows in comparison to just three appearances for the leading “left” guests. This is so imbalanced that it conjures images of a young child and their father playing on a see-saw.

The balance of the panel has improved lately. It seems they've shaken it up a bit since 28 January, with left panellists making up 18% of guests & 53% of shows featuring 1 leftie. That still leaves 47% of shows without a leftie, but it was much worse—86% of shows—prior to 28 Jan.

But the numbers still fall way short of balance:

But that still compares very badly with the right. 49% of guests since 28 Jan have been from the right. While it's an improvement for lefties to feature on 53% of shows, 93% featured a rightie. And still over half the shows have had a panel with 2 of 3 spots filled by the right.

Centre-left and left are the same, right?

Some have criticised Nunns for his decision to class some centre-left panellists as centrists:

So you are defining the left and Centre left (both historically labour supporters) as two separate political sides… you are basically endorsing the spilt of labour into labour (momentum) and what was referred to as New labour! Oh and basically the end of the Labour Party!

But Nunns explains why the idea that slightly left-of-centre panellists represent the left is dangerous:

The distinction is legit because since Corbyn the centre & centre-left have been very hostile to the left. The point of the panel, I think, is to bring insight to the viewers, but it’s hard for people who hate the left to convey its motivation & logic.

And seeing centrist panellists as ‘left wing’ dictates what is acceptable:

They won't, because it is deliberate. The mainstream media is one of the tools that the establishment use to tell the rest of us which views are – and are not – acceptable.

Therefore, excluding ‘left’ voices from the panel means it doesn’t reflect the electorate as a whole:

the left is routinely excluded from the panel, despite 40% of the electorate having voted for a party led from that position. That means the panel usually has little insight into what motivates one of the driving forces in contemporary British politics.

But portraying centrist viewpoints as representative of ‘the left’ does maintain the myth of impartiality.

Nunns’ figures provide indisputable evidence of what many have been arguing for a long time. That the BBC gives disproportionate space to views that affirm the establishment and avoids real left-wing voices.

One of its flagship political debates has had 53% right-wing panellists in the last year compared with only 10% from the left.

How do you defend that?