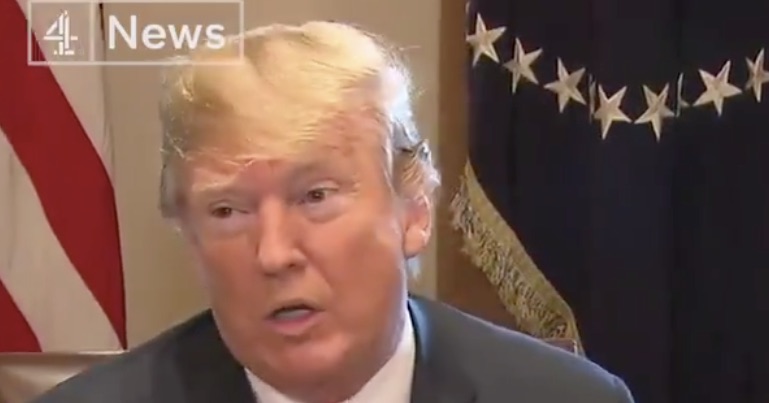 Despite saying he didn’t have the authority to sign an executive order to stop the separation of immigrant families at the US border, Donald Trump ‘realised’ he did. Because on 20 June, he signed the order. And it didn’t take long for Channel 4 News and others to expose his cynical hypocrisy.

President Trump has signed an executive order ending the separation of families at the U.S. border.

Five days ago, he said it was not possible to sign an executive order ending the separation of families at the U.S. border. pic.twitter.com/r3nXOEejLn

Trump found what must be ‘magic’ powers. As Channel 4 News pointed out effortlessly, signing this order was quite a turnaround. Because on 15 June, he said he couldn’t. And he tried to pin the blame on the Democrats.

In fact, he’s been deflecting blame onto the Democrats quite a lot:

Democrats are the problem. They don’t care about crime and want illegal immigrants, no matter how bad they may be, to pour into and infest our Country, like MS-13. They can’t win on their terrible policies, so they view them as potential voters!

It’s the Democrats fault, they won’t give us the votes needed to pass good immigration legislation. They want open borders, which breeds horrible crime. Republicans want security. But I am working on something – it never ends!

On 15 June, then, immigration laws were apparently impossible to change through an executive order at all. And Trump blamed the Democrats for a law he created.

But now, he’s signed one. And others on his team have also backtracked:

President Trump handed DHS Secretary Kirstjen Nielsen the pen after he signed the executive order ending the separation of families on the border. It's a policy she said three days ago didn't exist.

As Bernie Sanders has said, the Trump administration can’t get their own story straight. And Sanders posted a video on 20 June with some sage advice for Trump:

If you’re gonna lie, at least tell the same lie over and over again.

The video says Trump’s people are using these lies to “cover up their immoral policy”.

As The Canary previously reported, Trump’s administration has enforced a “zero-tolerance” immigration policy since April. Prior to this, children stayed with their parents.

The video shows how many times Trump’s administration has varied its narrative, and exactly how Trump’s policy worked.

Fact check: The Trump administration cannot keep their own story straight about the abhorrent practice of separating families at the border. Here is the truth about what's happening. pic.twitter.com/psEFi7RbL5

As one Democratic politician said:

We shouldn't congratulate @RealDonaldTrump on being forced to end his own cruel policy that separates children from their families. Thousands of children have suffered & will forever be scarred by the Trump Administration’s inhumane separation of families. #FamiliesBelongTogether

And he’s right. Because Trump is ending a policy he created in the first place – one that traumatised thousands of children and parents:

Here is Trump and his select group discussing the family separation crisis that he himself created. #WorldRefugeeDay pic.twitter.com/7Ddk0YFM5Z

Meanwhile, there is widespread cynicism about what this executive order actually means for families, since it doesn’t end the zero-tolerance policy:

An HHS official tells @weijia that there will NOT be special efforts made to reunite children who have already been separated from their families bc of the Zero Tolerance Policy, despite Trumps EO. Process will proceed for minors currently in the unaccompanied children program.

Make no mistake—this executive order is a betrayal of families fleeing violence and persecution. @realDonaldTrump found another way to punish parents and children for seeking protection. Detaining families is not the solution to ending family separation. https://t.co/LxO2K3GwNb pic.twitter.com/rWltxAStWZ

Something that people seem to be missing from this Executive order:

It will run afoul of a 1997 law called the Flores settlement, which limits children to 20 days in adult detention.

Just watch… Trump will force a judge to call his EO illegal and then keep the kids separated.

Don't be fooled. Donald Trump did not fix a law for separating families. He is seeking credit for ending what he claimed, was a Democrat law. THIS IS A LIE. He is trying to be the hero.

This strongman fascist bullshit must stop.

So Trump is no hero – no matter how much he (inevitably) brags that he is in the coming days. He has reversed a policy, which he said couldn’t be reversed, after creating it in the first place and lying about it. This man is the president of the United States of America. Just let that sink in.