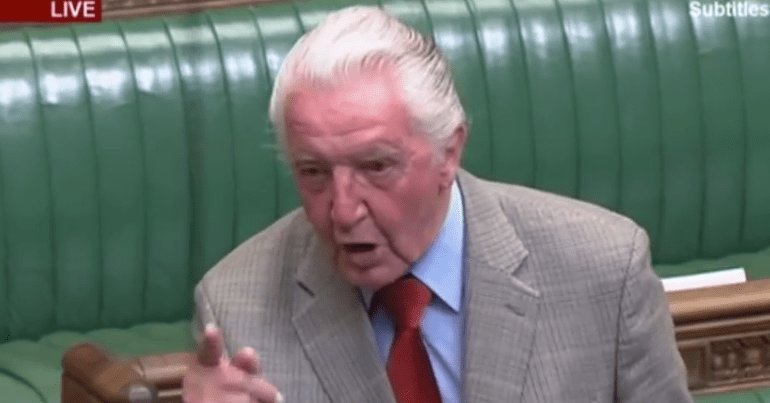 Veteran Labour MP Dennis Skinner ripped into Jeremy Hunt on 18 June. During a statement on the government’s new NHS plan, the UK’s oldest MP said the health secretary is “not fit to run” the NHS:

Dennis Skinner Rips into Jeremy Hunt:
"The reason why people won't listen to him & his 10yr plan, is because he's the man who only 2yrs ago was calling upon Junior doctors to work 7-days a week, & he caused Chaos in the NHS. HE's NOT FIT TO RUN IT!" 🔥🔥#BBCdp #BBCqt #PMQs pic.twitter.com/5cosGn2AOi

“Proud of that achievement”

The MP for Bolsover said:

Is the minister aware, for the sake of the record, that when John Major’s government fell and Labour came into office, it was £33bn being spent on the National Health Service. By the time the Labour government left office, it had trebled the amount of money – in real terms – and it was an average of 5.9%. And people like me are proud of that achievement.

Under the health secretary’s NHS funding plan, the government is offering an approximate 3.4% spending increase per year. But the Institute for Fiscal Studies (IFS) points out that the NHS needs increases in spending of 5% to tackle critical issues in the service. The IFS notes:

Much less than growth of 4% a year and the NHS will be able to do little more than tread water.

Hunt “not fit to run” the NHS

Skinner, who was first elected in 1970, rounded off by saying:

The reason why the people won’t listen to him and his 10-year plan? Because he’s the same man who, only two years ago, was calling upon the junior hospital doctors to work seven days a week, and he caused chaos in the National Health Service. He’s not fit to run it.

In 2017, Hunt tried to impose a seven-day contract on junior doctors. The thing is, the health secretary demanded a lot more work without providing anywhere near enough staff or funding. People saw the impossible contract as a deliberate attack on the NHS, to eventually pave the way for private companies.

Skinner gets it. Hunt, who comes from a private healthcare family, is the last person the country needs running our public health service.