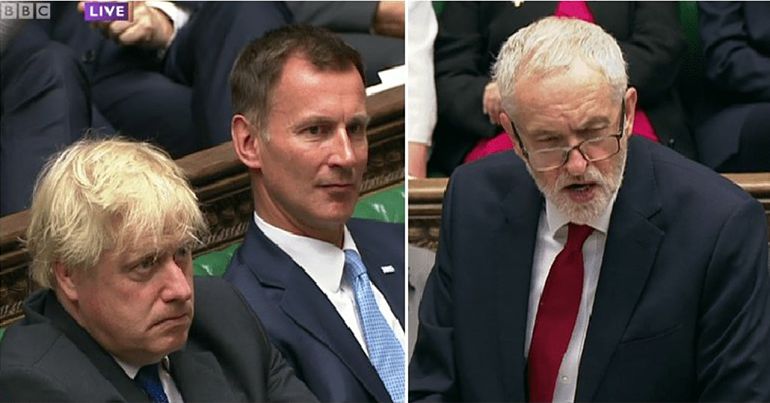 Top Tories Jeremy Hunt and Boris Johnson looked on in horror as Jeremy Corbyn nailed what’s really going on in the NHS.

The Conservative government is trying to convince people that its new NHS funding proposals will revitalise the NHS. But Corbyn set the record straight.

The Labour leader laid bare a health service in crisis at Prime Minister’s Questions on 20 June:

Bored of non answers and whataboutery? The only clip of #PMQs you need… Corbyn dropping truth bombs a plenty on the NHS. pic.twitter.com/NWian6gNOr

Laying into the government’s plan with his final question, Corbyn said:

Nothing for public health budgets, nothing for community health, or – vitally – nothing for social care. This is less than is needed just to stand still. And after the longest funding squeeze in history, A&E waits are their worst ever – 4 million people now waiting on NHS waiting lists, cancer treatment target not met for over three years, nurse numbers falling, GP numbers falling, and one hundred thousand staff vacancies, NHS trusts a billion in deficit, and a £1.3bn funding gap for social care.

The prime minister has now promised a £20bn per year cash injection into the NHS. Corbyn spent his first three questions pressing May on where the money is coming from, but she did not provide an answer. Instead, May insists her chancellor will enlighten people with his autumn budget:

The chancellor will set out the full funding package properly before the spending review.

Under the five-year NHS funding plan, the government is offering about a 3.4% spending increase per year. But the Institute for Fiscal Studies (IFS) points out that the NHS needs increases in spending of 5% to tackle critical issues such as those Corbyn raises. The IFS notes:

Much less than growth of 4% a year and the NHS will be able to do little more than tread water.

So not only has the government failed to say where the money is coming from, but the amount promised still isn’t enough. With his final question, Corbyn continued:

The prime minister is writing IOUs just to stand still. Until this government can be straight with people where the money is coming from, why should anyone anywhere trust them on the NHS?

Any spending increase on the NHS must be seen in the context of years of Conservative cuts to the service. With this in mind, May’s proposals are wholly inadequate to save the NHS from a crisis created by her own government.

Corbyn laid the Tory record on the NHS bare at PMQs. And May’s cabinet could only look on in horror.