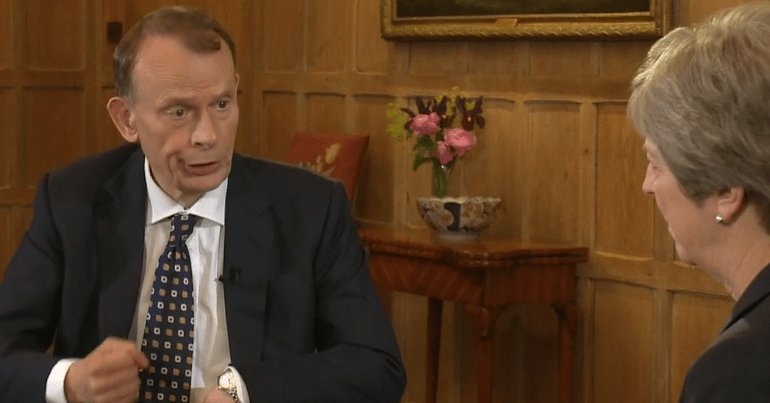 Even people normally uncritical of the BBC found Andrew Marr’s interview with the prime minister “pretty astonishing” on 17 June:

I'm not one for general BBC-bashing, but this is a terrible interview of Theresa May on #Marr

Pretty astonishing she's not even be challenged on the idea of a "Brexit dividend" for the NHS, when even official forecasts accepts this does not exist.

The opposite of a dividend

In a pre-recorded interview from Downing Street, Theresa May claimed her government will pay for an NHS cash injection through a “Brexit dividend”:

Of course we’ve got to fund… that money – that will be through the Brexit dividend – the fact that we’re no longer sending vast amounts of money every year to the EU once we leave the EU.

Forecasts from the Office for Budget Responsibility (OBR), which informs government policy, show that May is ignoring reality. Under the Conservatives, Brexit will cost public finances a net £15bn per year, according to the OBR. That’s the opposite of a dividend.

Despite May offering a complete fantasy to BBC viewers, Marr didn’t challenge the Conservative leader. In response, some people on social media were unforgiving:

#marr allowing Theresa maybot to claim a brexit dividend when every single actual study has shown we will be considerably worse off is the worse kind of government pandering. The BBC is little more than propaganda. Reality is that tax and debt will be paying for it (& brexit).

What a complete flake Andrew Marr is, he challenges her on nothing…either he nor his researchers are doing their jobs properly, or he just doesn’t have the balls to challenge her in anything #Marr

The interview did not look promising from the get-go. May began by alleging that she’s put more money into the NHS every year since 2010. When Marr quietly pointed out that in real terms that’s a “squeeze”, a stern look from May quickly extinguished the intervention. Marr then allowed the Prime Minister to shift the blame away from Conservative austerity and onto winters and an aging population.

Any spending increase on the NHS must be seen in the context of years of Conservative cuts to the service. Later, Marr questioned May on the backdrop to her new NHS spending:

the Institute for Fiscal Studies said, very recently, meaningful process on waiting times, staff shortages, and mental health, which you’ve just been talking about, will need growth of around 5%, not 3.4%, for the next five years. Much less than growth of 4% a year, and the NHS will be able to do little more than tread water

When May speaks of an extra £20bn for the NHS, it sounds like a lot. But overall NHS spending remains wholly inadequate, given the cuts the health service has already endured.

On top of that, May’s talk of a Brexit dividend is pure propaganda. Yet Marr didn’t challenge the prime minister on such outright bullshit. That’s another nail in the coffin for the political coverage at the BBC. We deserve and must demand better from our public service broadcaster.