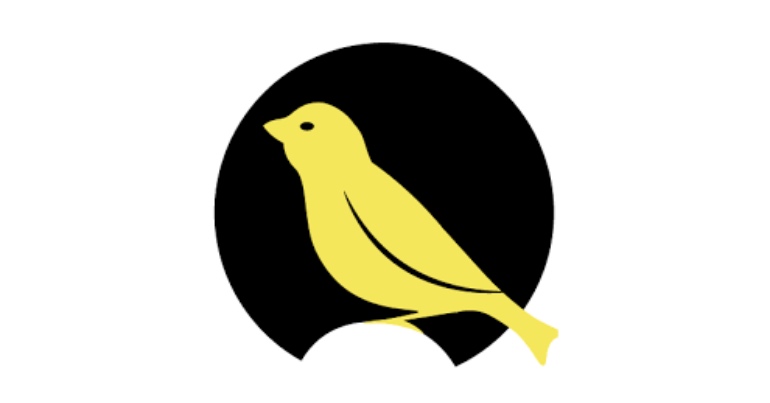 The latest Digital News Report from the Reuters Institute at the University of Oxford shows that The Canary is the most trusted digital-only news outlet in the UK by its readers. The report highlights the shifts in digital, traditional, and broadcast media over the past year.

Change is in the air with many media companies shifting models towards higher quality content.

According to the report, “consumer trust in news remains worryingly low in most countries”. Globally, there are also:

high levels of concern about so-called ‘fake news’ partly stoked by politicians, who in some countries are already using this as an opportunity to clamp down on media freedom.

Within this landscape, the emergence of The Canary as a key player in the distribution of news is significant. Not least because:

the digital revolution is full of contradictions and exceptions.

In the context of this report, The Canary emerges as an exception to challenge some key global trends, while establishing itself as the most trusted digital-only outlet by its readers.

The gap between overall trust in news and trust in favourite sources has grown, suggesting increased political polarisation.

The Canary is completely independent of any advertisers, funders, companies, political organisations, or political parties. It was the only outlet of this kind to feature in the brand trust analysis:

At the top of this data set, the report stated it was “another difficult year for the BBC“, because it was:

criticised over its Brexit coverage and was at the centre of a row over equal pay.

However, further analysis of the data – ordering by ‘trust by users of brand’ rather than ‘overall trust’ – revealed that The Canary is also the most trusted online-only news source in the UK by its readers: 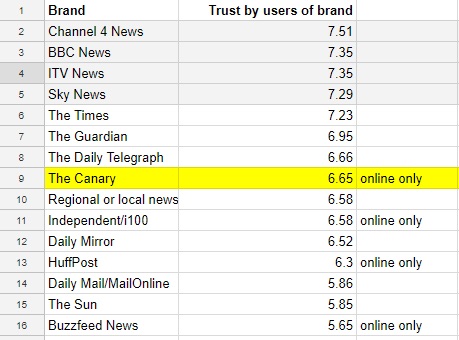 The Reuters report is internationally renowned and respected.  For The Canary to achieve this position is testimony to its stringent editorial process. Regulated by IMPRESS, the independent monitor for the press, The Canary is leading the way in the digital news landscape through openness, honesty, and journalistic integrity. Clearly, these are values that its readers recognise and understand.

Trust can’t be bought. It can only be given by readers. And in an age of dubious news sources, so-called ‘fake news’, and corporate media saturation, this is important.

In the UK, with a population of 66 million people, internet ‘penetration’ in relation to news is 95%. The report noted that since 2001, print circulation has halved. So the changing digital landscape is significant.

Digital news is growing and traditional media outlets are looking for new ways to engage audiences. But the impact of the Cambridge Analytica scandal and investigations into potential fake news during the EU referendum has led to a growing awareness of the relationship between:

misinformation and the role of platforms in undermining journalism.

As the digital media revolution continues to grow, media platforms – or the ways in which audiences consume news and media – are more interconnected than ever. These recent issues revealed both how fragile, and how powerful these platforms are. People have – quite rightly – been angry about potential manipulation of the news they read. So the issue of trust in UK news sources is significant.

This was the first report to examine brand trust, which it stated:

is particularly interesting given that Facebook announced that it will prioritise news ‘from publications that the community rates as trustworthy’, using an online survey.

The report found that the global growth of people using social media for news has “stopped or gone into reverse”. In the UK:

But it also found this was:

entirely due to changes in the use of Facebook, consistently the most widely used social network for news in almost every country.

This suggests either a fall in general engagement or a reduction in exposure to news by the Facebook algorithm, as the company prioritises interactions with family and friends and tries to limit the impact of ‘fake’ news.

In this changing digital landscape, brand trust is vital to outlets like The Canary. Its readers clearly know that it does not produce ‘fake news’.

Adapting to the future means less reliance on Facebook and developing content for other platforms. As the report notes, while the reach of news on Facebook has declined, there has been, “a rise in the usage of alternative platforms such as WhatsApp, Instagram, and Snapchat”.

With readers trust in place, this indicates that future growth, building organic reach, and building content across other platforms is viable.

The report also examined the rise of “populist, or partisan websites” and makes frequent reference to The Canary. It states that [pdf, p21]:

these sites have a political or ideological agenda and their user base tends to passionately share these views.

But also makes an important distinction [pdf, p21] that:

These sites should be distinguished from those that ‘deliberately fabricate the news’, even if they are often accused of exaggerating or tailoring the facts to fit their cause. Partisan sites are said to have played a part in bringing Donald Trump to power in the United States and in mobilising support for Jeremy Corbyn in the UK

Growing awareness of sites like The Canary is linked to wider concerns about mainstream media output. As one respondent said [pdf, p22]:

MSM [mainstream media] is biased, always covers the news to show the Tories in a good light, you have to look further if you want the truth.

The Canary is the most read, and most widely recognised, left-wing online news source in the UK:

In just under three years, The Canary has risen to offer a serious challenge to the overtly right-wing Breitbart, which has been running since 2007. Publication of the Paradise Papers also revealed that Breitbart receives funding of around $60m, which is largely invested in off-shore tax havens. Meanwhile, The Canary is entirely funded by subscribers and advertising revenue. It also pays full UK tax.

The most significant findings in the report showed that:

Given the rapidly changing digital news landscape, and the importance of brand trust, the report shows that The Canary is a key player within the UK media. It is now the most trusted by its readers, digital-only news outlet in the UK. And this report is evidence that as The Canary approaches its third birthday, its wings are growing stronger, and it will continue to fly.