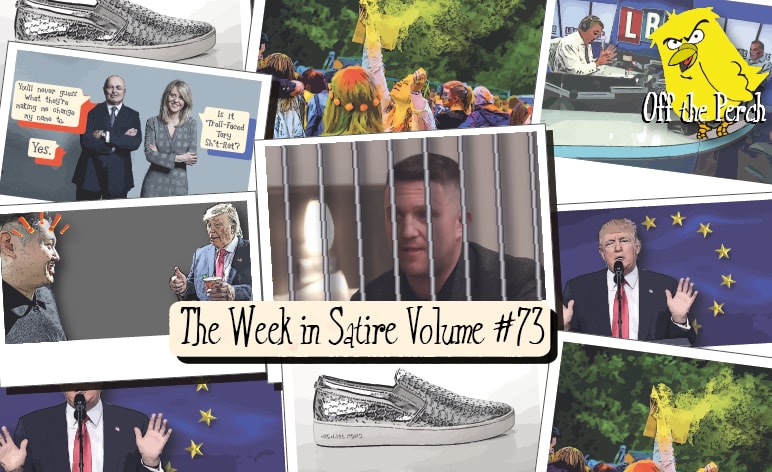 A week in which Labour Live went live! A week in which an undead-looking Tory was seen creeping about the festival with mirrors on his shoes! And a week in which the government looked increasingly dead on its feet! 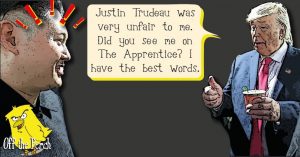 US releases discussion points for the Trump / Kim summit

Summits like the one between Donald Trump and Kim Jong-un usually take months of careful planning – primarily to avoid either party attaining a benefit the other hadn’t anticipated.

The fact that the Trump/Kim summit has been arranged on the fly shouldn’t concern you, however. It’s the fact that Trump couldn’t stick to a plan even if he had one that’s the biggest worry. Although the US does at least have some potential talking points.

According to the White House, Trump intends to:

If you’re worried that Trump will actually discuss all these points, you shouldn’t be. The man is incapable of sticking to a plan.

If anything, he’ll talk about something worse. 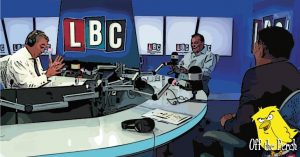 The ‘Bad Boys of Brexit’ are called that because they called themselves that, and there’s nothing cooler than coming up with your own nickname.

Another thing they’ve decided to do for themselves is prove they didn’t collude with Russia. Namely by interrogating themselves on Nigel Farage’s LBC radio show.

The British media, ladies and gentlemen

The conversation was held between Nigel Farage, Arron Banks, and Andy Wigmore:

FARAGE: So – the big question on everyone’s mind is this: did we do it?

WIGMORE: No we didn’t.

FARAGE: Well, that’s that sorted. What else would you like to talk about?

BANKS: I think it’s important everyone knows the Remainiacs are only saying we colluded with Russia because they hacked the emails we were hiding .

BANKS: Oh yeah. I mean those emails we were not hiding. But anyway, if you don’t wanna hear about us colluding with Russians, maybe don’t hack our emails, yeah?

FARAGE: So in summary, would you agree we’re being subjected to a witch-hunt?

BANKS: Definitely. Just let the witches get on with it – that’s what I say.

WIGMORE: No, Arron, the point of the saying is to imply the person conducting the witch-hunt has given into baseless paranoia.

BANKS: Wasn’t Baseless Paranoia the name of that club they took us to in Siberia?

FARAGE: Well, that clears that up. No collusion whatsoever!

For anyone worrying this is pretty dubious journalistic standards, don’t worry, because the Bad Boys may still have to deal with the courts. It’s just that post-Brexit, the justice system will be run by the Daily Express. 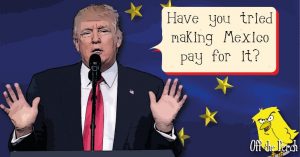 President Trump hands his Brexit plan over to Boris Johnson

Boris Johnson recently suggested President Trump take over Brexit for us. Although Theresa May wasn’t too happy about the idea:

Regardless of May’s concerns, Trump has now provided us with what he described as:

The hastily scribbled plan came written on the back of a cheeseburger wrapper. It advised:

The UK’s Brexit team is said to be considering Trump’s suggestions. Although they are worried the plan is a bit too detailed for them.

‘Universal Credit’ to be renamed ‘Scarce Merit’ by Trading Standards

To call Universal Credit a total disaster would be an insult to total disasters everywhere, but only because it hasn’t rolled out enough to qualify yet. It has notably been disastrous for those afflicted by it, and would be a full-on cluster-fuck if it went universal.

Despite the Department for Work and Pensions’ (DWP) failings at rolling out this failure, Trading Standards has seen enough. And that’s why it’s insisting the DWP changes the name.

Can’t even get the name right

Trading Standards took issue with both parts of the ‘Universal Credit’ name. It explained:

UNIVERSAL: The problem with saying this scheme is universal is that it isn’t. In reality, Universal Credit is rarer than a Tory with a conscience. Well – maybe not that rare. They did all vote for Universal Credit, after all.

CREDIT: The problem with implying people will be credited is that far too often they’re not. Apparently, the purpose was to make the entire system fairer and more balanced. In reality, the only thing it’s stabilising is the number of sick and disabled who can’t afford to live. The problem is it’s increasing such injustices rather than decreasing them.

As such, we feel the scheme should henceforth be named ‘Scarce Merit’ – a name that neatly sums up its total lack of validity, purpose, or success.

Of course, there are still those who defend Universal Credit. His name is Iain Duncan Smith, and he told us:

Having no money is the quickest way out of poverty for people who can’t work. Trust me.

Duncan Smith then proceeded to eat a beetle that crawled out of his suit – licking at it with his long, forked tongue.

“You can’t be poor if you’re dead,” he added cheerfully.

In response, we flicked holy water at him until he left the building. 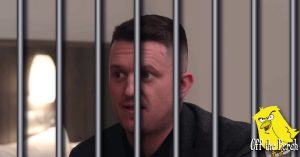 Right wingers often complain that prisons are too soft; ‘lags’ are too coddled, and justice is too wishy-washy.

Or at least they do until someone they like gets sent down, anyway. Which is why they’ve all been complaining so much since Stephen Yaxley-Lennon (a.k.a. Tommy Robinson) was imprisoned.

One tabloid bigmouth had this to say:

Contrary to my previous 15,000 articles on the matter, I now realise prisons are TOO TOUGH! These prisoners aren’t being given enough Sky Sports; their feelings are too often going unconsidered, and their sentences are too unreasonable!

The #FreeStevie campaign, meanwhile, has demanded the following:

Of course, there are many good reasons to reform the prison system. Not least because more progressive prisons manage to prevent crime, whereas privatised revenge fortresses only serve to increase it.

Still though, that’s why actual reform is a good idea. Moaning that prisons are too tough every time some dipshit repeat offender gets imprisoned, however, isn’t about reform. It’s about being a crybaby.