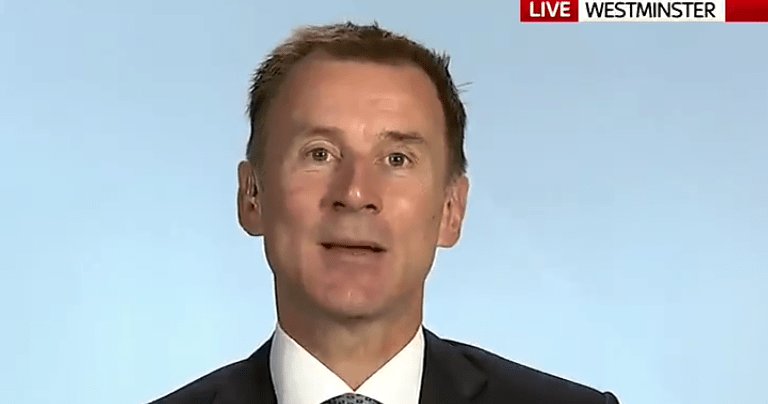 Sky News anchor Sarah-Jane Mee left Jeremy Hunt seething after the ‘Brexit dividend’ blew up in his face. The Conservative government is claiming it can pay for a £20bn-per-year cash injection into the NHS primarily through money saved by ending EU payments. Yet the Office for Budgetary Responsibility (OBR) predicts that Brexit will cost the economy a net £15bn per year. And the government has accepted this official forecast, which is the opposite of a dividend.

When the health secretary repeated the ‘Brexit dividend’ line on Sky News, the interview went south:

That’s going to be funded through a range of ways, but one of them is what the British people voted for. They said they wanted their money to be spent not on subscriptions to EU membership, but on our vital public services like the NHS.

Shortly after, interviewer Mee pointed out:

The Office for Budgetary Responsibility, government-backed organisaton, and the Institute for Fiscal Studies – their analysis says that actually there will be a Brexit cost, there will be no dividend.

Hunt then tried to sidestep the issue:

After about a minute of question-dodging from Hunt, Mee challenged the health secretary again:

Where’s the money going to come from? Tax rises? Borrowing? What’s plan B?

After the easy ride Theresa May got on the same topic on Andrew Marr, Hunt was left seething at the line of questioning:

I’m clearly going to disappoint you, Sarah-Jane, but I can’t tell you what the outcome of November’s budget is on a breakfast show in June…

Health Secretary @Jeremy_Hunt tells Sky's @skysarahjane, that the 'precise details' of the £20bn #NHS will be left to the Chancellor pic.twitter.com/qfAHCOs7MA

The fact is: we are facing the opposite of a Brexit dividend. Under the Conservatives, Brexit is set to cost the UK billions per year. So Hunt looked like a right mug pretending otherwise on Sky News. The health secretary and the government have no idea where this money is coming from.