Did the Sun base its World Cup 'PC meltdown' story on a tweet from a parody account? - Canary 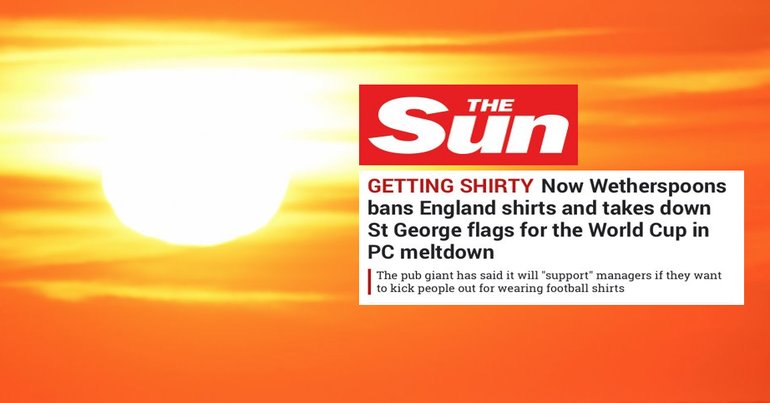 The Sun headline screams: Now Wetherspoons bans England shirts and takes down St George flags for the World Cup in PC meltdown. And the newspaper was soon able to find outraged bar staff and punters to fume about PC culture. One barman said:

Absolute joke that we have to take our England flags down at work. We are an English pub chain.

But the Sun story does include a spokesperson from the pub chain denying any such policy exists. They told the paper:

We have given all of our 880 pubs World Cup bunting which includes the St George’s Cross.

We have no specific issue with football shirts. But if a manager for whatever reason feels it doesn’t fit in with his or her pub, they have the discretion to say no.

If no blanket ban policy exists, what is the point of running the story?

As eagle-eyed social media users noted, just hours before the Sun published its story, a parody Wetherspoon Twitter account made this claim: 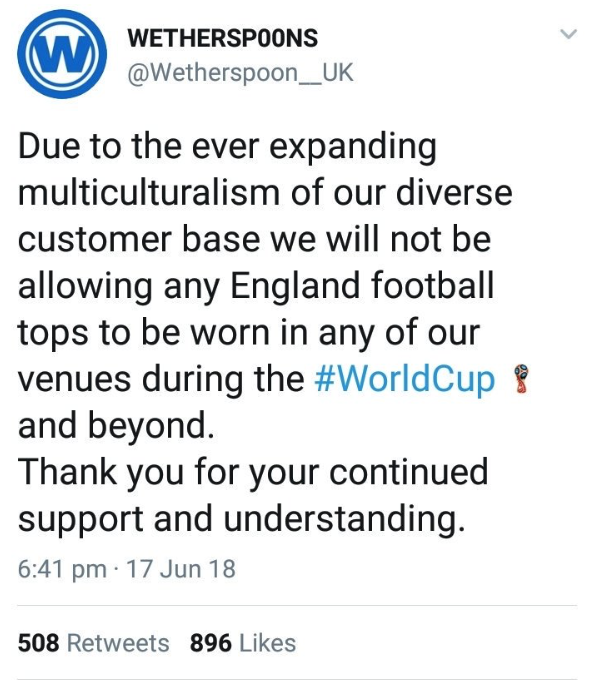 It appeared that the Sun may have been duped by the tweet. And even when Wetherspoon set the record straight, they ran the story regardless.

Today's excellence in journalism award goes to The Sun, for running a story based on a parody twitter account. pic.twitter.com/L07RFvScSc

This is genius; @TheSun reporting a tweet from a parody account as fact. Investigative journalism at its best #ENGTUN pic.twitter.com/7lpSEZiFab

The reason this matters is the fallout. The story implies English people are being prevented from displaying their flags or football team shirts to avoid causing offence. It guns straight for the right-wing trope of the censored patriot, constantly forced to suppress their identity for the sake of others. And it had the expected response. The comment section is vitriolic: 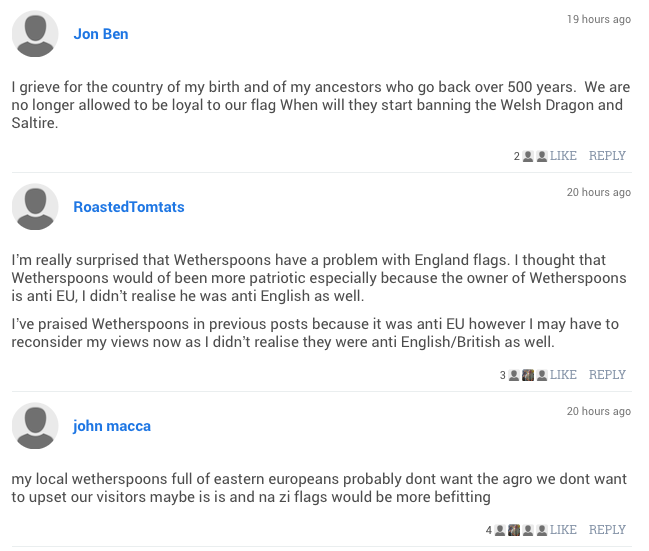 Furious customers then besieged the parody Wetherspoon account with angry messages. The issue grew so large, it got its own hashtag: #ShirtGate.

And #ShirtGate is even rumbling on in my DM’s. Tom pic.twitter.com/z5wqYw4obq

The Canary spoke to Wetherspoon to get its view on the story. A spokesman for the pub chain told The Canary they were originally contacted by a freelance journalist who wanted to sell the story to the Sun. The journalist had seen a tweet from one member of staff, and asked about the wider policy.

The spokesperson reiterated to us that the policy was not designed as an act of political correctness. Instead, it’s for the considerably less headline-friendly reason of brand standardisation (that every Wetherspoon you walk into should have the same/similar feel).

To be clear, Wetherspoon has no blanket policy against football shirts of any kind. But it does reserve the right to refuse service to customers making an arse of themselves. A spokesperson told The Canary:

As a company, we have never had an issue with football shirts or flags. We want to make sure that customers get the same standards of service in their local Wetherspoons pub, wherever it is.

We don’t want one type of flag in one pub and a totally different one in another. We use the same approach at Christmas, sending each of our 880 venues the same Christmas display to create a Westherpoons Christmas experience. This is what we’re doing for the World Cup. It’s nothing to do with political correctness or political incorrectness, it’s just our way of celebrating the World Cup with our customers.

Do pass on the good news. The Sun may not have based its story on a single tweet from a parody account. In fact, it may have done worse. It may have elevated the interpretations of a single member of staff above those of the chain, and run the story to create maximum rage in football fans and nationalists. At a time when such tensions are higher than they’ve been for a generation, this would be tantamount to incitement.