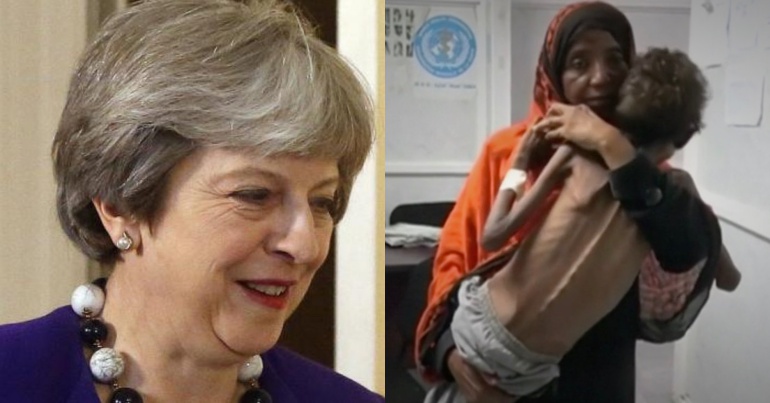 Violence has escalated in Hodeida, one of the main ports in Yemen. The implications of this are devastating in a country that has suffered a brutal civil war since 2015. According to the UN, Yemen is the “worst humanitarian crisis” in the world. And both the UK and the US are complicit in the ongoing violence and its devastating consequences.

Since March 2015, the Saudi Arabia-led coalition has been fighting Houthi forces in Yemen and those loyal to former president Ali Abdullah Saleh. According to Human Rights Watch, the Saudi-led coalition is:

Hodeida is a major Yemeni city with a strategically vital port and airport. It was held by Houthi rebels. Since violence escalated, “thousands of Hodeida’s 600,000 civilians have evacuated and hundreds of people have been killed”. On 16 June, the death toll was estimated to be 280. But the latest violence also has devastating implications for the whole country, because as Truthout reported:

The port city is the main conduit through which about 70 percent of international aid reaches Yemenis, many of whom are battling starvation and outbreaks of infectious diseases such as cholera.

The World Health Organisation (WHO) has been unequivocal in condemning the latest violence:

The port of #Hodeida is an essential lifeline for the country: more than 70% of all food, essential medicines and healthcare supplies are brought in through this port. #Yemen@DrTedros pic.twitter.com/lv1HENfWmf

Because this latest assault is devastating:

The humanitarian situation in #Yemen is already catastrophic.

The recent push for #Hodeida will only exacerbate it further: https://t.co/iD7mgoc5wc pic.twitter.com/jqL0ww05gm

The human cost of this war is tragic:

A sad mother of a sniped child in #Taiz , put Eid clothes 4 her child on his grave with longing for him. #Yemen pic.twitter.com/GScZQJJxi5

And this could get worse. As the WHO stated, if violence in Hodeida continues, a further 250,000 people could die, and 8.4 million will be threatened by famine:

#Hudaydah Port is the most important channel in #Yemen through which 80% of imports including commercial and humanitarian goods enter. If movement at the port is hindered, millions of Yemenis in need will be affected. pic.twitter.com/RDQ6q6J5ev

According to the UN, more than 22 million people in Yemen now need humanitarian assistance. As Human Rights Watch reported, in November 2017:

5,295 civilians had been killed and 8,873 wounded… although the actual civilian casualty count is likely much higher.

On Friday 15 June, Sweden called on the UN Security Council to initiate an immediate ceasefire in Hodeida. It was rejected:

The 15-strong body failed to agree to a statement calling on forces led by Saudi Arabia and the United Arab Emirates to implement a ceasefire, with the US and UK both voicing opposition to the text introduced by Sweden.

Although the UK said it would “discourage” an attack, it failed to support the ceasefire fully:

So UK is saying it is strongly ‘discouraging’ an attack on Hodeidah. Yet this is a part-British war with UK warplanes, UK-trained pilots, UK missiles, UK-maintained aircraft/weapons and UK apologias for war crimes. If it wanted to stop it, it could. pic.twitter.com/tYyQ0YAO8H

As the Guardian reported, Saudi Arabia is using “British-, American- and French-made arms” and Western military support. This war is, in effect, now conducted “with diplomatic shelter from the west”, and:

So it goes on, the suffering mounting, further unsettling this unstable region and breeding cynicism and rage towards the west and its talk of human rights and international law. If the complicity ever looked deniable, events of recent days have laid it bare.

The situation in Yemen is complex, but the UK and US have a key role to play:

EXPLORE: as seen on #AJNewsGrid

Military action in Yemen: Who's for it, who's against? 🇾🇪🇸🇦🇦🇪🇮🇷 from @AJEnglishhttps://t.co/5G2UzsogUI

The Saudi Arabian dictatorship is a Western ally. Heavily linked to terrorism, it has also faced allegations of war crimes in Yemen. Despite denials by the Saudi foreign minister, a UN report in 2017 stated that:

Coalition airstrikes continued to be the leading cause of child casualties as well as overall civilian casualties. Some 3,233 of the civilians killed were reportedly killed by Coalition forces.

The BL-755 is designed to be dropped from the UK Tornado fighter jet, scores of which the UK has sold to Saudi Arabia.

Theresa May’s relationship with Saudi Arabia raises many questions. As does the fact that, since 2015, the UK has licensed £3.8bn of arms to the authoritarian regime.

As humanitarian crisis worsens, remember that UK has been profiting from arms sales to Saudi knowing they were being used in #Yemen

BAE Systems is a major beneficiary of these sales. It is “the world’s fourth largest arms producer”. And according to Campaign Against Arms Trade:

BAE’s warplanes are playing a central role in Saudi Arabia’s attacks in Yemen.

Although both Iran and Saudi Arabia have equally poor human rights records, Donald Trump has persistently war-mongered against Iran since becoming US president. But he has not criticised Saudi Arabia in any meaningful way. In fact, he has claimed that it was Iran which had “fuel[ed] Yemen’s civil war”, while completely ignoring Saudi Arabia’s key role – and alleged war crimes – in the Yemeni conflict.

The human cost of the conflict in Yemen is tragic. But our government refuses to take meaningful action. The situation in Yemen has already killed too many people, and now so many more are threatened.

It is difficult to see both the UK and the US as anything other than complicit in genocide.

– Write to Theresa May and your MP. Ask them to push for peace talks in Yemen. Until that happens, ask them to cancel and stop approving arms sales to Saudi Arabia.