A neoliberal government is waging war on its own people, with help from an old dictator - Canary 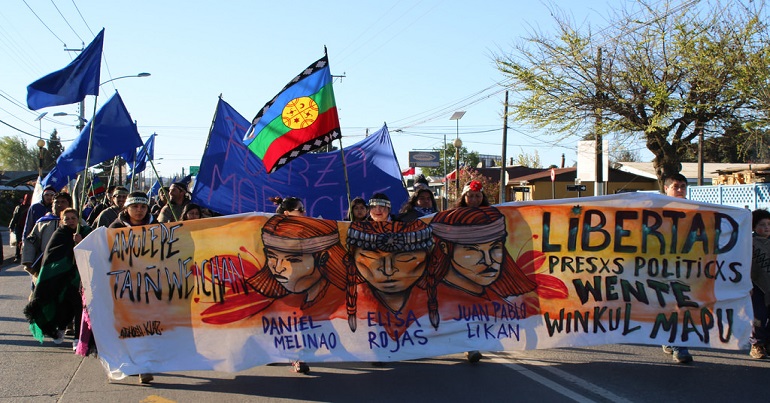 The Guardian recently wrote about Chile’s Mapuche conflict, claiming that some members of the indigenous Mapuche community are using violence as a means of protest in the Araucanía region. But it didn’t give the full story. Because in reality, Chile’s neoliberal government is essentially waging war on its own people – with the help of a law introduced by former dictator Augusto Pinochet.

The Canary looked at this context, and spoke to a Mapuche activist to set the record straight.

The Mapuche are a people whose nation is located in the south of the territories currently occupied by the states of Chile and Argentina. A little more than 130 years ago, its ancestral territory extended from the south of the Bio-Bio river in Chile to the southern end of the continent, and in Argentina from the Colorado and Salado rivers to the Strait of Magellan.

Isolated acts of arson have been reported in southern Chile. But successive Chilean governments have made it policy to criminalise the Mapuche struggle for autonomy, through the use of controversial anti-terror laws. Amnesty International has accused Chile of applying justice in a “discriminatory manner” against indigenous leaders.

In 1984, Augusto Pinochet legislated an ‘anti-terrorism’ law that would see any future attempts to recover disputed Mapuche land as an act of ‘terrorism‘. The law remained unchallenged by the ‘socialist’ administration of former president Michelle Bachelet.

The situation for Mapuche communities hasn’t improved since democracy was restored in 1990, and the last decade has been marked with several deaths at the hands of Chilean police. Matias Catrileo, for example, was shot in the back in 2008. He was an unarmed student. José Quintriqueo, meanwhile, was protesting peacefully when he was crushed to death by a tractor in 2014.

When a wealthy, elderly couple – Werner Luchsinger and Vivian McKay – died during an arson attack in 2014 (following a long land dispute with the local Mapuche community), several community members were rounded up and imprisoned with very scant evidence to prove their guilt. The case remains unsolved, yet those who have been accused of the arson attack – such as Celestino Córdova, who is currently on hunger strike in prison – are still serving indefinite sentences.

Things didn’t improve much under the centre-left Bachelet administration. It oversaw the embarrassing ‘Operation Hurricane’ fiasco. Undercover police claimed that they had intercepted terrorist activity via WhatsApp, and they used the ‘evidence’ to storm Mapuche communities and arrest several community leaders. The evidence was found to be fabricated.

An activist speaks out against state and paramilitary violence

Landowners and forestry companies tend to exaggerate claims of violence, claiming it proves the existence of terrorism, yet there are no deaths. The only deaths that occur are those of the Mapuche who have been killed at the hands of state police. Mapuche community leaders have consistently condemned the existence of anti-Mapuche paramilitary groups in the (Araucanía) region who are supported by local businesses and landowners, such as ‘Comando Hernán Trizano‘ and ‘Patria y Libertad‘. These call for violent action against us and carry firearms. Chilean police and legislative bodies choose to turn a blind eyes to these.

Ben Emmerson from the United Nations concluded in a 2013 report presented to the Human Rights Council that organised terrorism does not exist among Mapuche communities in Chile. He urged the Chilean state to discontinue its anti-terrorist stance against the Mapuche people. While the situation in the region hasn’t worsened, there is a constant police presence, constant raids on homes and arbitrary arrests.

Reynaldo himself has been accused of terrorism, simply for representing his culture through an NGO.

But in a climate where Mapuche children are seeing their rights violated, it’s clear to see where the violence is really coming from.

– Support the work of independent media outlets like The Canary so we can keep holding the powerful to account.