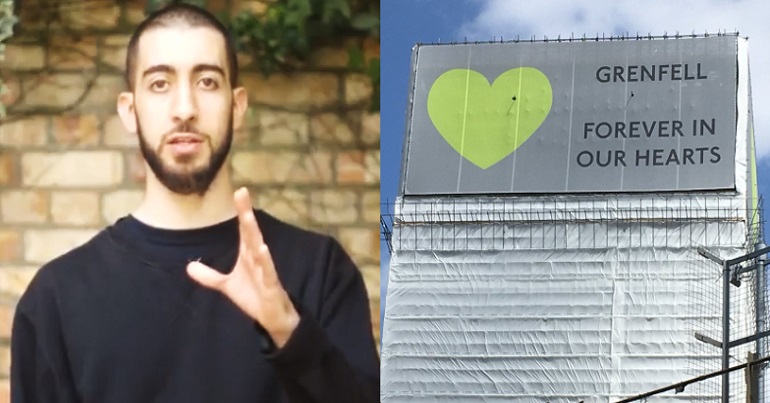 A conscious rapper-turned-poet has tackled head-on a controversial assessment of the Grenfell Tower fire. And in doing so, he has exposed what one person called the “fake news” surrounding the tragedy that killed 72 people.

A rapper and Grenfell

Potent Whisper (aka Georgie Stephanou) comes from a single-parent, working-class family on a council estate in south-west London. It’s those politics and social issues that shape Whisper’s music. He’s paid particular attention to the Grenfell Tower fire through his work, not least the publication of a collection of spoken-word pieces called The Rhyming Guide to Grenfell Britain. But now, his attention has turned to a controversial piece of writing about the tragedy.

On 7 June, author Andrew O’Hagan published an essay on Grenfell. Called The Tower, it was the culmination of a year’s worth of research. While some, like Iain Martin at Reaction, praised O’Hagan’s work, it also received a fair bit of condemnation.

Susanna Rustin wrote in the Guardian that his work not only blamed the fire service for the 72 deaths, but that:

the bigger problem is O’Hagan’s whole thrust, the main argument of the piece: a defence of Kensington and Chelsea council in the face of what he calls “the narrative” of Tory malice and incompetence being pushed by everyone else… In one extraordinary passage, O’Hagan writes: ‘In every situation pertaining to a public event, people, often with the best intentions, tell lies. They want the story to be the story they want it to be, and no group is more typical of that tendency than reporters.’

Even worse than his false assertion that reporters are liars is the role he assigns to local activists including the Grenfell Action Group… the group is contemptuously dismissed, along with the Action Group bloggers, as hate-filled and secretive.

After a member of the community got in touch with him, Whisper wrote a response to O’Hagan. It’s damning in its assessment of him and his analysis.

He speaks as if people only blame the council leaders,
Like it’s a choice between them and someone else,
But people want the truth, to whomever that may lead us,
But in my opinion, they’re responsible as well.

But Andrew just wants to twist this narrative,
Twisting everything so it fits his narrative,
Selectively picking all the bits he’s happy with,
Says he’s seeking justice but he just miscarries it,

Writing his own story

Others have accused O’Hagan of misrepresenting the fire service, lying and also twisting their words in his piece. Whisper uses [8:25] this as the hook in You’ll Never Edit Grenfell:

Everyone loves a good story,
A story’s a powerful thing,
History is made up of stories,
Stories shape how we think.

But the real power is held by the writer,
The person who decides what the story might contain,
And in relation to ‘The Tower’ and the fire,
O’Hagan writes his-story with every single page…

As with all Whisper’s work, it is a thought-provoking and searing piece of spoken word. Not least because it effectively untangles what he sees as O’Hagan’s lies and manipulation surrounding the deaths of 72 people.