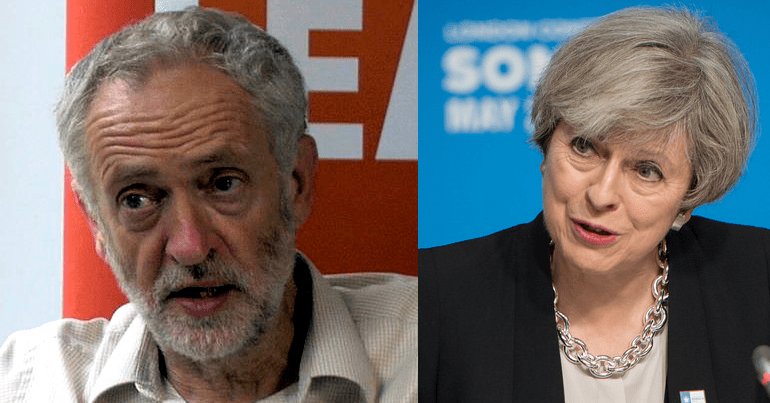 Jeremy Corbyn has denounced Donald Trump’s “tragic and shocking” migrant policy, making Theresa May look feeble. Recently, Trump defended his ‘zero tolerance‘ immigration policy that has meant border guards separating children from their parents. The US president appeared to dehumanise the caged children, comparing them to a “Trojan horse”. He justified such language by alleging criminals are using the children to get into America.

In response, the Labour leader was categorical:

It's tragic and shocking to see innocent children caged like animals at US migrant camps and to hear their cries of anguish after being forcibly separated from their parents.

It's immoral and goes against fundamental human rights we must always respect, no matter the situation.

Meanwhile, the prime minister has merely distanced herself from Trump’s immigration policy. Downing Street contrasted the US immigration approach with the UK’s, which Number 10 said is more “humane”.

As Fréa Lockley previously wrote for The Canary: “US authorities now have over 11,000 children ‘in their care’ after separating them from parents at border crossings”. Still, May’s government plans to greet Trump with lavish ceremonies upon his arrival to the UK on 13 July.

“Showing him the red carpet”

People, from MPs to the grassroots, are demanding May cancels the state visit and stops appeasing Trump:

Trump thinks it’s ok to tear brown children from their parents & lock them in cages, @theresa_may. In showing him the red carpet next month, you are enabling a fascist, pure & simple. This is not the 1930s. Take a stand. Please. pic.twitter.com/thg8lJ7P0e

..& @theresa_may will entertain Trump in this country next month. Unacceptable. https://t.co/0PUVIy2DJU

Now’s the time for Theresa May to cancel Trump’s visit. And any answer she or her chinless Tory acolytes give about being a critical friend needs stamping on. https://t.co/6pT43A6UeI

Seriously, UK. We need to cancel Trump’s visit over this lock-up-children policy.

About a month until Trump's visit. I wonder whether his administration will still be locking children up in concentration camps when he meets the Queen.

Donald Trump is separating kids from their parents and locking them up in cages in prison camps. If you're not going to protest against that – then what?

Take to the streets on July 13th when Trump gets the red carpet treatment. https://t.co/zK8jERfOE2 pic.twitter.com/M9dnZ2NhH6

Ahead of the 2017 general election, a record-breaking [paywall] petition to ban Trump from a UK state visit reached almost 2 million signatures.

The prime minister also faced allegations of appeasing Trump when he imposed a ‘Muslim ban’ on people entering the US in early 2017. May’s response was to say:

At the time, the leadership in France, Germany and Canada and the UK parliament all condemned Trump’s policy. May’s government was left isolated.

Corbyn says the Trump administration is treating children like “animals”. On top of border authorities caging them, many children are “fleeing gang violence and poverty” that has its roots in policies from US governments. As HuffPost reported:

These people are seeking asylum from an environment that US government policies helped create. Nonetheless, the Trump administration is separating children from parents and putting them in cages.

May’s feeble response amounts to appeasement of such behaviour. By contrast, Corbyn was unequivocal in his condemnation.

If Trump’s visit to the UK goes ahead, we’ve got to show him hell.

– 137,000 people have suggested they could be hitting the streets when Trump arrives. Get on board.