As Theresa May recycles the Brexit bus lie, two leading Brexiteers are accused of treason - Canary 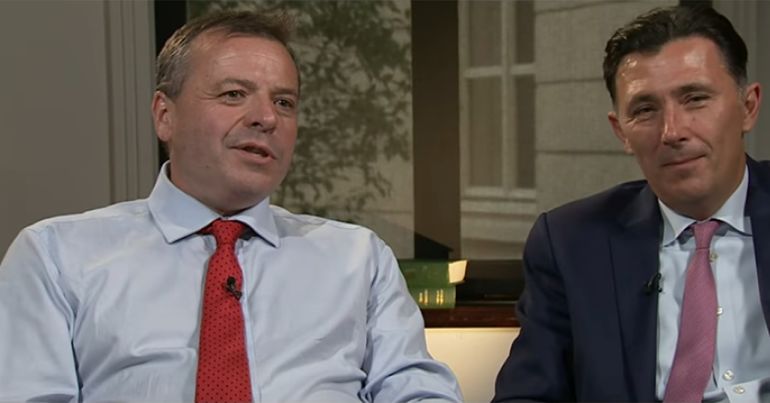 Prime minister Theresa May has announced that a ‘Brexit dividend’ will help finance the NHS. Channel 4 News‘s ‘Fact Check’ responded by saying there’s no clear link between the NHS funding boost and any ‘Brexit dividend’. However, the Brexit vote wasn’t just influenced by a lie emblazoned on the side of a bus. It may have been prey to collusion by Russia with two leading Brexiteers, now accused of treason.

Powerful piece by @carolecadwalla in the @observer on how treason has been quietly accepted because implications are too big. #Brexit not just a mess but fundamentally illegitimate.

Cable was referring to an article in the Observer by Carole Cadwalladr. It mentioned the infamous ‘gold deal’, allegedly offered to Banks by the Russians. It’s unclear if Banks accepted the deal, though he later tweeted: “I’m buying gold at the moment & big mining stocks”.

A meeting between Banks and Alexander Yakovenko, the Russian ambassador, was reportedly arranged by Russian ‘diplomat’ Alexander Udod, who was later expelled from the UK after the poisoning of Sergei and Yulia Skripal. The goldmines were owned by Russian magnate Siman Povarenkin who, it seems, was introduced to Banks by the Russian ambassador. Povarenkin is chairman of gold and copper mining firm GeoProMining. Russian state-owned bank Sberbank owns 31% of GeoProMining’s shares. Somerset Capital Management, the firm co-founded by arch-Brexiteer and Conservative MP Jacob Rees-Mogg, invests millions of pounds in EU-sanctioned Sberbank.

Banks told the Commons Digital, Culture, Media and Sports select committee that the gold-mining deal was merely “a proposal” and “doesn’t mean there’s any wrongdoing”. He also claimed that businessman Peter Hambro and former army chief Field Marshal Lord Guthrie advised him to “be circumspect” about the offer. Banks added “I have no business in Russia, I have done no business deals in Russia”. Hambro, known as “Goldfinger”, co-founded gold mining company Peter Hambro Mining, later renamed Petropavlovsk Plc.

In another article in the Observer, Cadwalladr and Peter Jukes referred to “multiple meetings” Banks had with Russian officials prior to the 2016 EU referendum.

But the Russians deny any collusion, telling the Observer:

The Russian Embassy has not in any way intervened in domestic UK political process, including the Brexit referendum. Meeting stakeholders representing all political spectrum of the host country is a natural element of the work of any embassy.

Arron Banks now says he’s exhausted by all the recent investigations into his role with Leave.EU and that he may quit politics for good. He admitted: “From our point of view, the referendum stuff is slowly grinding towards a conclusion in the most painful horrible way”.

Wigmore also announced he intends to leave the UK for Belize, a country for which both he and Banks have acted as diplomats.

This raises questions about Wigmore and Banks in relation to Article 31 (1c) of the Vienna Convention [pdf, p9]:

Hmm. Interesting/confusing. How does this work, @andywigmore & @Arron_banks? You were both Belizean diplomats while organising/funding the Brexit campaign. It's being suggested here, that contravenes Vienna convention. Anyone? https://t.co/Cw7dkp7CG2

If that clause disqualifies Banks and Wigmore, then there’s another reason for the EU referendum to be voided.

Meanwhile, Theresa May faces a major challenge by Tory rebels to her Brexit strategy. If successful, it could pave the way for a complete reassessment of Brexit.