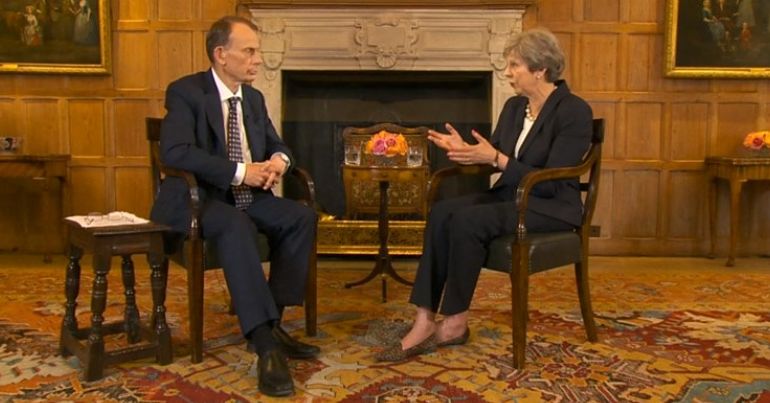 On 17 June, Theresa May revealed that the Conservative Party is giving the NHS a 70th birthday present. Speaking on The Andrew Marr Show, she stated the government will be giving the NHS an extra £20bn a year by 2023.

The NHS in England is to receive an extra £20bn a year as a 70th "birthday present", Theresa May tells #Marr https://t.co/rymEFOPEnR pic.twitter.com/ov6ldmkOMX

But don’t start celebrating just yet. As is often the case with this government, the announcement is not all that it seems.

The new ‘boost’ for the NHS comes after years of underfunding. While the government has not spelled out exactly where the money will be coming from, it’s thought it will be through higher taxes and a mysterious Brexit dividend.

On a Brexit income, @theresa_may says: “These issues will be finalised when we put the withdrawal agreement into a legal treaty.” #marr pic.twitter.com/AyVa58kE3d

When Marr asked whether a Brexit dividend actually exists, Guardian columnist Polly Toynbee was scathing in her response:

Talk about absolute fraud, Brexit dividend? Certainly not. According to the two most reliable sources, the Institute for Fiscal Studies, Paul Johnson, head of that, says – ‘there is no Brexit dividend’ and he quotes the Office of Budget Responsibility … who says on the contrary there will be £15 billion less.

And people on social media were equally pessimistic:

Theresa May just said higher spending on the NHS would be funded by "the Brexit dividend" – it does not exist. The OBR has forecast Brexit will *cost* the UK £300m a week. #Marr https://t.co/eUY8sg0D0f

Paul Johnson, director of the Institute for Fiscal Studies, had the final word:

There is no Brexit dividend

The confusion around where the money is coming from also led to scepticism from shadow foreign secretary Emily Thornberry. Marr put it to her that she must be delighted about the new funding boost. To which she stated:

Yes, I mean I would certainly welcome it if we could believe it.

She went on to question the government’s apparent lack of costing for such a significant proposal:

“Our manifesto had these things costed”, says @EmilyThornberry #marr pic.twitter.com/K4P9e1K0da

People on Twitter were quick to highlight the government’s hypocrisy:

Suddenly, with this extra money (and presumably due to it coming from a Tory gob) there’s no mention of ‘affordability’ and a ‘magic money tree’. Your cowed parroting of the tory line is why fewer & fewer people trust the Brext Broadcasting Conservatives.

And others were worried about who will eventually be made to foot the bill:

You can be sure any extra money May puts into anything will come from the poorest in society. She won't touch the well off. Tax the rich and corporations instead.

Even if these incredibly sketchy funding proposals are more than just hot air, the money the government has promised is still not enough:

As Marr put it to May, to bring about meaningful change on issues such as waiting times and staff shortages, the NHS needs a 5% boost in funding. The Tories have promised just 3.4%. This is less than the historic annual increase:

The historic annual increase is 3.7% so you're still below that…? Yes or no?? Admit it don't give more twaddle and fluff!

Too little too late

On the NHS’s 70th birthday, this Tory proposal is reminiscent of an estranged parent tying to cover years of neglect with a lavish gift.

But you don’t have to scratch far below the surface to reveal that the gesture is all bluster. The complete lack of costing, and reliance on a Brexit dividend that experts say doesn’t exist, is an insult to the NHS.

No wonder people aren’t buying it.