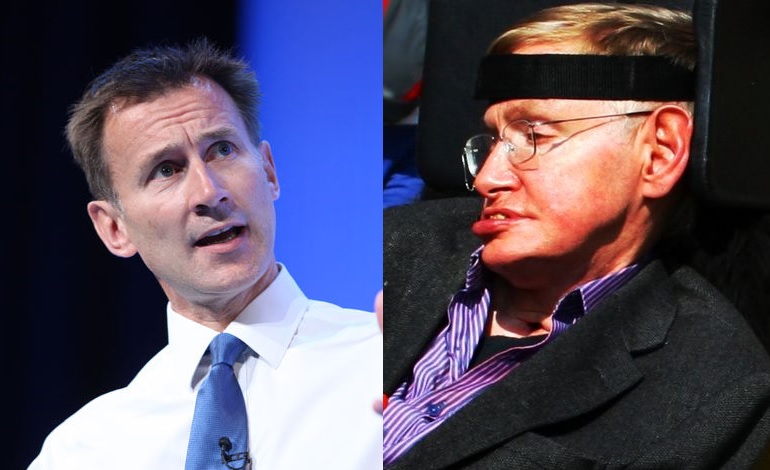 Speaking as a scientist, cherry picking evidence is unacceptable. When public figures abuse scientific argument, citing some studies but suppressing others, to justify policies that they want to implement for other reasons, it debases scientific culture.

Hunt then tried to counter Hawking on social media:

Stephen Hawking is brilliant physicist but wrong on lack of evidence 4 weekend effect.2015 Fremantle study most comprehensive ever 1/2

And whatever entrenched opposition,no responsible health sec could ignore it if you want NHS 2 be safest health service in world as I do 2/2

Jeremy Hunt: "Stephen Hawking is brilliant at his only job which is to analyse evidence but he's not brilliant at analysing evidence" pic.twitter.com/bxZReZPhwq

Just let that surreal accusation put everything Tories do into perspective

The MP for South West Surrey claims that 11,000 patients die annually because of understaffing at weekends. But Hawking disputes this, as The Guardian reports:

Hawking will say that four of the eight studies cited by Hunt were not peer reviewed and that he ignored 13 papers which contradicted his statements.

Still, Hunt appears eager to uphold his claim about increased mortality at the weekend. Hawking will expand on the implications of such behaviour, in his speech at the Royal Society of Medicine:

One consequence of this sort of behaviour is that it leads ordinary people not to trust science, at a time when scientific research and progress are more important than ever, given the challenges we face as a human race.

Hawking will also be very critical of NHS privatisation, which campaigners say is the ultimate aim of Conservative health policy. The aim of privatisation might be why Hunt so readily challenges Hawking on the studies. Critics argue the Conservative government uses the “7-day NHS” buzzword to obfuscate its chronic underfunding of the service. Focusing attention on patient-centred progress disguises the privatisation agenda.

The huge increase in the use of private agency staff, for example, inevitably means that money is extracted from the system as profit for the agency, and increases costs for the whole country.

‘Towards a US-style insurance system’

The author of A Brief History of Time will also warn of the NHS becoming ‘Americanised’:

International comparisons do suggest Hawking is correct. In 2014, the US spent 17.1% of its GDP on healthcare – without providing cover to all Americans. In the same year, the UK spent just 9.1% of its GDP on healthcare, while providing universal cover. The major difference across the Atlantic is that private companies are making huge profits. Whereas if healthcare is public, we can reinvest profits into the service.

Hawking is spot on to challenge the Conservative government’s ideological destruction of our healthcare. With privateers like Virgin Care and Care UK circling like vultures, the NHS will only be around as long as we fight for it.