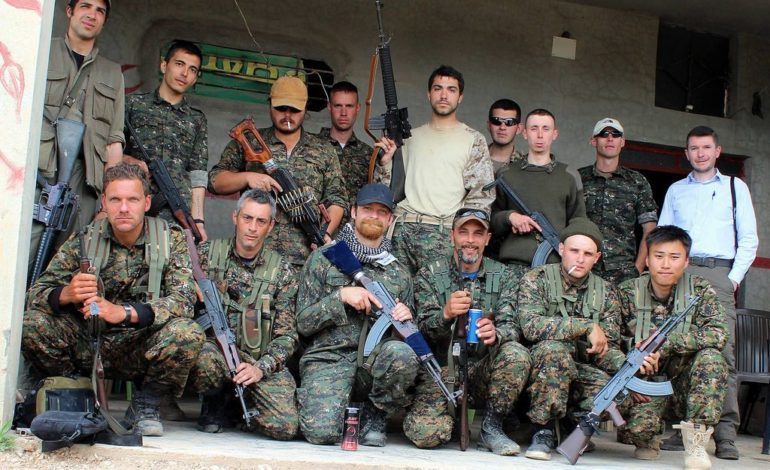 The neoconservative Henry Jackson Society (HJS), which has close links with the far right of the Conservative Party as well as the political right in the US, has just published a report [pdf] which argues that people currently fighting against Daesh (Isis/Isil) are terrorists. Specifically, it claims that the Kurdish-led YPG (People’s Protection Units) are terrorists; and that Westerners who volunteer with the YPG could on their return home carry out terrorist attacks. But the report, written by HJS Associate Kyle Orton, takes little account of how both the British and US military are supporting the very same Kurdish-led forces.

The potential for such recruits to be drawn into lone-actor terrorism, whether individual or directed by a foreign terrorist organization, has to be taken seriously.

Orton lists [pdf p36-115] profiles of around 60 anti-Daesh volunteers. He then argues why the government should screen volunteers returning to the UK for possible criminal charges:

At present there is no agreed nation-wide process to handle those who return from Rojava. It is in the national interest that a clear mechanism be established that can screen returnees to assess whether they require further state attention, either from the criminal justice system or social services. Given the very hazy situation of the law with regard to those who join the YPG, and the illegitimacy of applying any new legislation retroactively, the criminal actions this process would be designed to detect are war crimes and other breaches of the laws of war committed while in the ranks of the YPG. The law can be used to prevent future recruits.

Orton also proposes [pdf p128] that the Foreign Enlistment Act, which harks back to the 19th century, be amended to criminalise these volunteers. And he further advocates [pdf p131] that the British government’s ‘Contest’ (counter-extremism) strategy and Prevent programme should be applied against media outlets that publicise the activities of the PKK (Kurdistan Workers’ Party, which Orton equates with the YPG) and volunteers.

Many analysts in the West recognise that the PKK and its YPG allies are among the most effective anti-Daesh fighting forces on the ground, in both Iraq and Syria. Turkey, however, is currently waging war on the PKK (as well as other opponents of the current regime). And possibly because Turkey is a NATO member, the EU, the US, Australia and most Western media – but not the UN – continue to label the PKK (and occasionally its allies) as terrorists. But this is at odds with reality, as the PKK consistently condemns attacks on civilian targets, and is only at war with the Turkish state today because the latter destroyed peace talks in July 2015.

And what about US and UK support for these fighters?

Context aside, another major factor that Orton underplayed was the West’s strategic alliance with Kurdish-led ground forces in Syria.

In April, The Washington Post reported on how Turkey was bombing anti-Daesh fighters in Syria; and it referred to the YPG as “a major component of US-backed forces”.

And in June, US Defense Secretary Jim Mattis left open the option of longer-term military assistance to the YPG. He also stated that the US may need to continue supplying the YPG with weapons and equipment after the liberation of Daesh-controlled Raqqa:

The US also provides the YPG-led SDF (Syrian Democratic Forces) with military equipment. And at least 300 US soldiers are reportedly fighting alongside the SDF.

The UK government also provides military support for the SDF through the RAF, as its latest report shows. (A more detailed breakdown of RAF sorties in support of the SDF is here.)

The response from YPG volunteers

British YPG volunteers Macer Gifford and Kimmie Taylor have now made their views known on the Orton report:

[This report is] madness, a definitely Turkish influenced piece as everything he talks about exactly comes from the AKP [Turkey’s ruling party] affiliates. To say we Westerners could possibly attack our homelands, laughable.

The families of those volunteers who have died, meanwhile, are outraged by the report. And they reject its description of the YPG and the motives of the volunteers.

A HJS spokesperson, however, has said: “We stand by the research in the report, and the profiles featured are all sourced properly within it.”

The YPG has been defending a secular, multi-ethnic, and feminist experiment in direct democracy since 2012 in Rojava (northern Syria). The Turkish government has opposed this from the very start. And now, Turkey and Iran are reportedly talking about a joint offensive against the PKK.

The publication of Orton’s report, meanwhile, is an insult to some of the most effective ground forces fighting Daesh terrorists today. And to put it bluntly, the HJS is clearly on the wrong side of history.