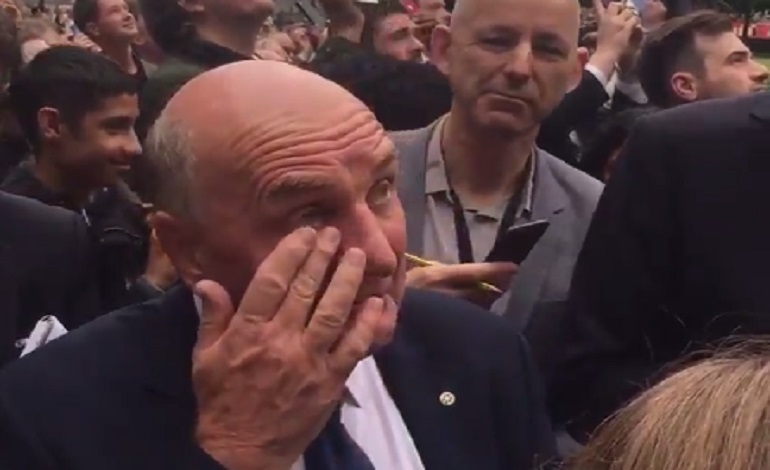 On Monday 21 August, MPs gathered outside parliament to hear Big Ben chime for the last time until 2021. But one Labour MP caused quite an uproar. Because he appeared to be howling over the silencing of one of the world’s most famous clocks.

But journalists caught Labour MP for Ealing North Stephen Pound on film apparently shedding a tear over Big Ben falling silent. He had organised a ‘vigil‘ to mark the last bell-ringing until 2021, while major repairs are carried out. But several videos emerged of Pound wiping away what people assumed to be a tear:

Stephen Pound quotes old saying that "no one is as conservative as a Labour MP" as he watches Big Ben chime. Not sure what is real here. pic.twitter.com/SyvJe3BdUB

When asked if he was “joking”, Pound told The Press Association:

No, of course I’m not, of course we’re going to be there – a group of like-minded traditionalists. We’re going to be gathering outside the members’ entrance, gazing up at this noble, glorious edifice, listening to the sounds rolling across Westminster, summoning true democrats to the Palace of Westminster.

We’ll be stood down there with heads bowed but hope in our hearts.

Bong-O Gone-O That’s So Wrong-O… These are the chimes of freedom rolling across Westminster.

Who’s lost it? You decide

Journalists and social media users alike couldn’t tell if Pound was being serious, or majorly taking the piss.

A visibly-moved Stephen Pound gazed up at Big Ben as it chimes for the final time till 2021. pic.twitter.com/euIGGeZrCq

But Tom Williams thought Pound was having a laugh:

Stephen Pound is the finest wind-up merchant in Westminster.

This Twitter user, meanwhile, felt the UK needed to go to the ballot box for the fourth time in two years to decide:

We should have a referendum on whether or not Stephen Pound is taking the piss. I'm voting Yes, though I don't know much about it.

Whether Pound was taking the piss is debatable. But PM Theresa May certainly wasn’t, when she caused uproar condemning the silencing of Big Ben more than she did Donald Trump’s comments over the Charlottesville terrorist attack. Moreover, MPs have warned that the cost of renovating the clock could spiral from £29m to £60m; at a time when 3.9 million children are living in poverty and 90 people a month die after the Department for Work and Pensions (DWP) declares them ‘fit for work’.

Historically, Big Ben used to house a prison where MPs were sent if they breached their code of conduct. And with the current state of the UK, maybe part of the £60m refurbishment cost for Big Ben should be allocated to doing that prison up. But it would need some serious renovation – the MPs’ jail would be bursting at the seams if it was still in operation today.