A gun-toting American Nazi promises 'violence', then cries like a baby when karma calls [VIDEO] - Canary 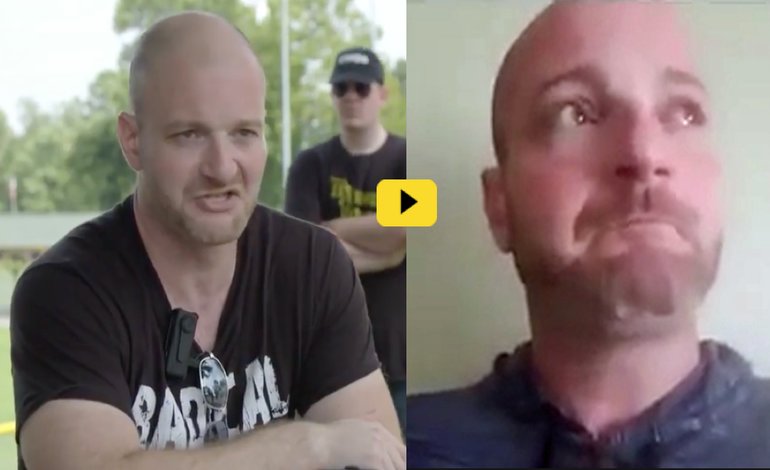 Neo-Nazi Chris Cantwell went to Charlottesville, Virginia with a gun – saying he was “ready for violence”. But when a warrant was issued for his arrest, he cried like a child. Now, he’s facing further penalties… and still sobbing.

Cantwell was one of several hundred neo-Nazis who took part in the ‘Unite the Right Rally’; a march on the Virginia State University campus to protest the removal of a Confederate statue. The white supremacist marchers carried burning torches and chanted slogans including:

One people, one nation, end immigration

Jews will not replace us

And the historic Nazi slogan:

Vice News featured several interactions with Cantwell in its documentary about the rally. When asked by Vice about the murder of Heyer, Cantwell described the deceased and 19 wounded as “stupid animals” who “couldn’t just get out of the way of his [the terrorist’s] car”. He concluded:

I think it was more than justified.

He also dismissed the killings of unarmed black Americans like Trayvon Martin as justice.

Cantwell also displayed his array of weapons, including a range of hand guns, rifles, and knives. And several times, Cantwell states he is “capable” and “ready” for violence.

But on finding out police have issued a warrant for his arrest, Cantwell folds like a napkin. He released a video of him sobbing and begging police not to kill him, stating that he never intended violence:

A call from karma

Unlike Heather Heyer, no harm ever came to Chris Cantwell. He never faced physical threat, just crumpled at the thought of it. But his widely shared tearful pleas left him humiliated, and outed.

Internet users quickly discovered Cantwell’s blog, which revealed he has a profile on dating site OkCupid. The white supremacist had published a post entitled “8 Online Dating Tips, for the Ladies”, aimed at women using the site. His advice read:

1. Unless you’re here for “casual sex” stop telling me you’re “sick of the games”.

2. Your boundaries are complete bullshit.

4. If you think all men suck, this tells me you have a habit of choosing shitty guys.

5. In a photo of you and a friend, I assume you are the ugly one.

On discovering the news, OkCupid deleted Cantwell’s account. A statement from the company reads:

We were alerted that white supremacist Chris Cantwell was on OkCupid. Within 10 minutes we banned him for life.

There is no room for hate in a place where you’re looking for love. If any OkCupid members come across people involved in hate groups, please report it immediately.

Facebook, Instragram and PayPal have all since removed his accounts.

Cantwell and his fellow Nazis now complain they are the subject of a vendetta by the state. They claim oppression. Which is strange, because they have spent years arguing that private businesses should have the right to withdraw their service from people on the basis of their ethnicity, gender identity or sexuality.

In 2015, right-wingers raised over $800,000 for a pizzeria whose owners stated they would never cater a gay wedding. And there was outrage from conservatives when the Supreme Court ruled against a Christian baker who refused to bake a wedding cake for a same-sex couple.

But the far right feels differently when one of its own number is refused service:

Cantwell and his peers enjoy the same rights today that they have had for their entire lives. If they cannot respect others having those same rights, they cannot complain when they have the privileges of civil society stripped from them.

– Supporters have raised nearly $1m to support the victims of the Charlottesville car attack. You can donate here.

– Support the work of Hope Not Hate to fight bigotry in the UK.