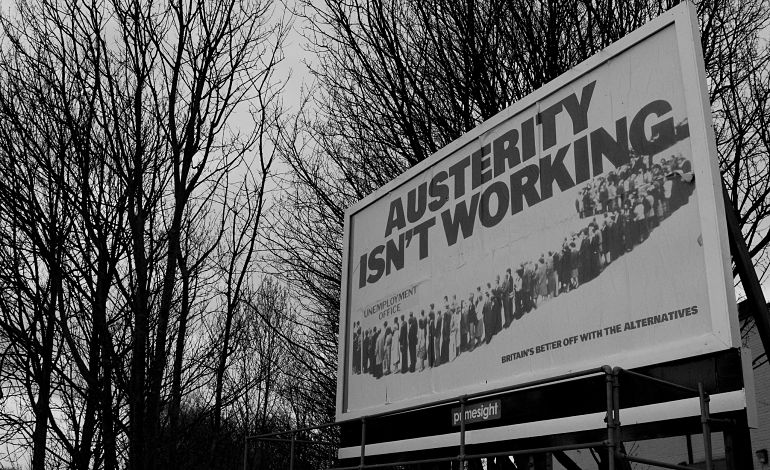 Austerity has been at the heart of politics in the UK since the 2008 global financial crash; in particular since the Conservative party took control in 2010.

And the book The Violence of Austerity from Pluto Press persuasively shows why. Through its collection of essays, editors Vickie Cooper and David Whyte argue that [p.2]:

people most affected by austerity cuts are not only struggling under the financial strain but are becoming ill, physically and emotionally, and many are dying.

The book lays out how the government justifies its “violent” policy; who the policy affects and its impact; and it presents what really lies behind the neoliberal agenda of austerity and how we can oppose it.

One thing the book comments on is how violence occurs through apparently harmless forms [p.3]:

The routine order and administration involved in, for example, seeking asylum or determining whether a person is legally homeless can have lasting and damaging effects whereby the failure to properly support people exacerbates and reproduces other violent circumstances in their lives. These routine administration practices are not always identified as violent; but they are.

It argues that the way violence is carried out through legitimate means, makes it seem normal [p.24]:

Perhaps we have become so accustomed to the ease with which people are evicted and become homeless, or to the food banks, the street-begging and the epidemics in suicides, that we do not make the most obvious observations: that the age that we live in is one in which the political violence of the state is becoming normalised.

And because of this normalisation, people don’t always see the violence.

The book explores how violence has occurred in four parts.

In Part I, Deadly Welfare, the book looks at groups of people unduly hit by austerity. It also highlights how government work programmes can enable employers to ruthlessly exploit unpaid volunteers. But soaring suicide rates show the worst impact of austerity, which has been on mental health.

Part II walks through how austerity has amplified poverty. And it points to some very visible examples, such as the rising number of food banks. It touches on non-tangible impacts such as the stigma of poverty, which is also discussed in Chapter Six of Part I, The Degradation and Humiliation of Young People. And the “othering” in the media has made this stigma worse. These are all signs, the book argues, of symbolic violence.

Parts II and III present an overview of how state regulation and state control is slowly erasing social protections; while taking the means to oppose austerity out of public control. For instance, the shrinking social housing stock and lack of rent controls have led to a violent process of evictions. And law enforcement are now policing peaceful protestors by using counter-terrorism methods. Austerity is also no longer just a policy, its been turned into law, forcing local authority actors to carry out its violent agenda [p.185]:

Law-sterity always involves the threat of the state imposing fines upon local government officials, which can ultimately lead to prison sentences.

The neoliberal agenda of austerity and what to do about it

Mary O’Hara, who authors the first chapter, quotes David Stuckler and Sanjay Basu who wrote the book The Body Economic: Why Austerity Kills?. They wrote in The New York Times saying:

If austerity were tested like medication in a clinical trial, it would have been stopped long ago…

But the government remains committed to its austerity agenda. The editors say its motive is to stabilise the economy in a way that benefits the rich. It does this by growing inequality and privatisation, which will end in the permanent disassembly of the state.

This is not something that members of the public have to accept however. The book notes examples where countries have rejected austerity, like Iceland, which happened on the back of public protest. And activists have taken many successful legal actions against the government due to its unreasonable measures.

The book is enlightening and an education. And it’s a very accessible read, so that ultimately the violence of austerity is plain to see.

– Get The Violence of Austerity from Pluto Press.