Jeremy Hunt's Facebook live stream may have broken a record. And not the good kind. - Canary 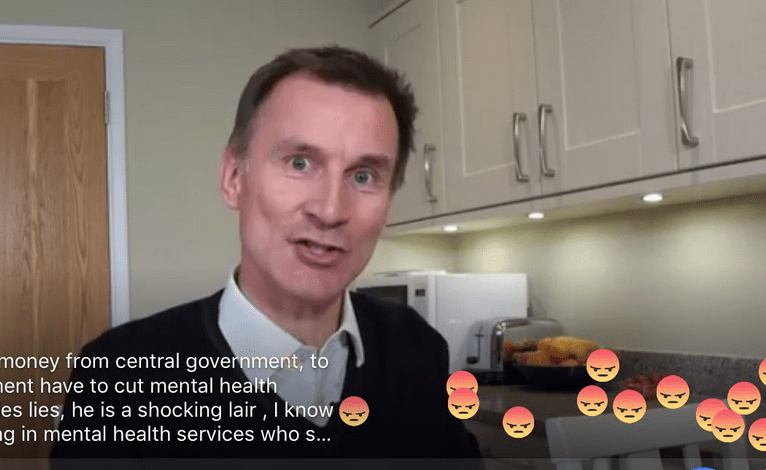 Jeremy Hunt launched a Facebook live stream that may have broken a record. But unfortunately for the Health Secretary, not the good kind.

Hunt received an angry comment every few seconds throughout his hour-long Q&A session. Here is a flavour of the constant stream of furious Britons:

The fury was also reflected in the ratio of negative to positive emoji responses on the video. Out of about 4,800 emoji responses, only 418 were positive. Viewers responded with the ‘angry’ emoji 4,387 times. That suggests around 91% of respondents were angry at the Health Secretary.

During the stream, Hunt tried to downplay [-25:39] the negative response to any supporters that may be watching:

You will get people from other political parties having fun with some of the things you see on your screen. Don’t worry about any of that. This is the internet. This is social media.

But receiving such an avalanche of angry emojis is hardly common on Facebook. By contrast, when Jeremy Corbyn live-streamed the release of the Labour manifesto, over 20,000 people responded with ‘likes’ and ‘love’ emojis. Only 127 people opted for the angry emoticon.

The live stream and privatisation

As soon as Hunt announced the live stream, it was off to a questionable start:

Hunt began with a question on privatisation of the NHS, from a kitchen that looks quite modest for a multi-millionaire. The question read [-59:27]:

Stephen Hawking says that you’re privatising the NHS. Do you seriously expect us to believe you rather than the smartest man in the country?

I’m afraid on the NHS, he is wrong. If you look at what this government believes, we are people… who grew up being told by our mum and our dad that the best thing about being British is that… it doesn’t matter who you are: rich, poor, young or old, you should always be confident of getting the best NHS care. And that’s why I’m passionate about the NHS… There has been a growth in the use of the independent sector from just under 5% when we took office to 7.7%. So there is a small growth there.

Hunt appeals to family values, but his father was chairman of two private healthcare firms for over a decade. And since the Health and Social Care Act came into force, Hunt’s government has awarded one third of NHS contracts to the private sector. No wonder people on the Facebook live stream were so angry.

– Sign the petition demanding Richard Branson return the money he sued from the NHS.