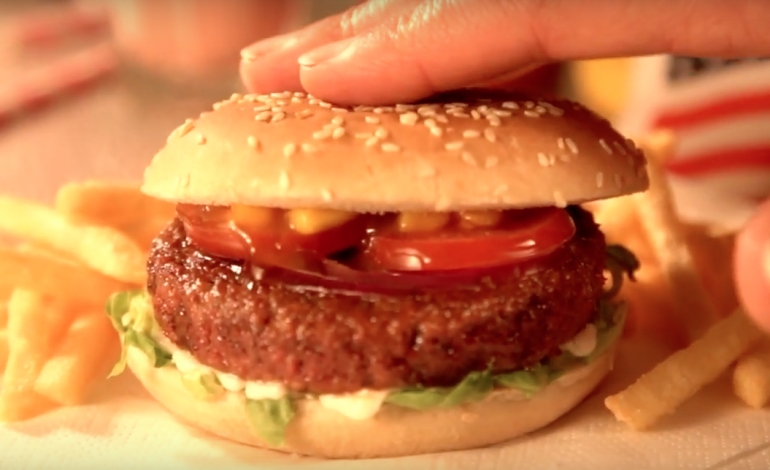 British company Moving Mountains is set to launch a 100% plant-based burger that ‘bleeds’. Producing food that is sustainable is a top priority for company founder Simeon Van der Molen.

As The Canary previously reported, US companies Impossible Foods and Beyond Meat have both developed meatless burgers that ‘bleed’. Just like with Beyond Meat’s Beyond Burger, Moving Mountains’ burger contains beetroot. This mimics the red colour and bleeding of meat. The patty is also made from mushrooms, potato, coconut oil, wheat and soy proteins, and is fortified with vitamin B12.

Beyond Meat chairman Seth Goldman has said that the company plans to launch its Beyond Burger in the UK early next year. There is no exact launch date for Moving Mountains’ burger, but it will also be in early 2018.

Pat Brown, the founder of Impossible Foods, has emphasised that environmental concerns played a major role in the creation of the Impossible Burger. The company states that, when compared to actual meat, its plant-based burger uses 95% less land, 74% less water, and produces 87% less greenhouse gas. Likewise, Van der Molen said:

Our 100 per cent plant-based meat B12 Burger has taken scientists, chefs and farmers over two years to make and is the closest replication to animal meat in the UK, but requires less land, less water and produces less greenhouse emissions.

The environmental impact of the animal agriculture industry is becoming catastrophic and so it is essential that technological innovation keeps up to provide a real solution for food that is sustainable but doesn’t compromise on taste, therefore providing a viable alternative for vegans, vegetarians and meat-eaters alike.

With animal agriculture being a significant source of environmental damage, companies that offer consumers ‘meat’ without the meat could turn out to be game-changers in the food industry.