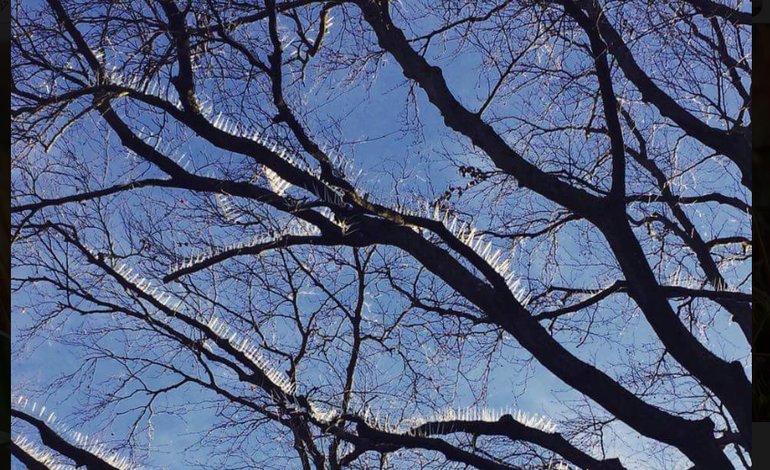 Residents of the wealthy Bristol district of Clifton have installed anti-bird spikes to the trees that line the streets. A local confirmed they had effectively banned the birds from the trees to prevent bird poo landing on their BMWs and Audis.

The public were first made aware of the spikes through social media, when a Twitter user posted them online:

Our war on wildlife: now birds are not allowed in trees…?! Pigeon spikes spotted in Clifton, Bristol above a car park. Has anyone seen this before? How is it allowed?!
📷: thanks to Anna Francis pic.twitter.com/NuG9WvYBMj

The Bristol Post picked up the story and spoke to a local resident to get more details. The anonymous local argued that the spikes were no big deal, and that people were just “looking for something to get upset about”. The resident added:

The spikes are solely to protect the cars, there is no other reason.

There is a big problem with bird droppings around here. They can really make a mess of cars, and for some reason they [the birds] do seem to congregate around this area.

The decision to prioritise clean cars over the needs of roosting birds provoked outrage:

We have reached a new low. Appalling! 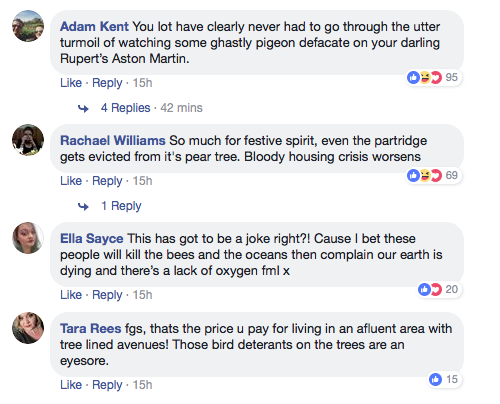 The move is the latest in a string of un-neighbourly actions pitching wealthy newcomers to the city against locals. In November, one of Bristol’s oldest and most loved live music venues was forced to close its doors permanently due to noise complaints from the residents of newly-built luxury apartments nearby. Several other respected venues such as The Fleece and Thekla are also under threat due to the gentrification of the town centre.

Last year, outrage from locals forced The Galleries shopping centre to remove anti-homeless-people spikes. The owners installed the spikes to prevent homeless people seeking shelter around the outside of the shopping centre.

Live music, wildlife or homeless people; the drive of wealthy residents to cleanse their communities of any offending poverty or nature is stripping districts of the city of all character. And without a cultural shift, things are unlikely to change.

Unfortunately, the local council appears to have no powers to compel removal of the anti-bird spikes. Tree Preservation Orders (TPOs) exist to prevent damage to significant trees, with fines of £20,000 available. But the trees in question are not TPO protected. So despite local outrage, there is little the local authority can do.

– If you’re a Bristol resident, contact your MP here.

– Speak out about this on social media, help make people aware of the issues.

– Support the work of the RSPB.