The Daily Mail was savaged in parliament. Its response was pathetic. [VIDEO] - Canary

On 18 December, a debate aired in the House of Commons regarding public abuse of MPs. Conservative ‘remainer’ Anna Soubry and Shadow Home Secretary Diane Abbott both discussed threats and harassment received via social media. But in summing up, speaker John Bercow singled out a far more mainstream culprit.

Much of the debate focused on the internet, where abuse has allegedly increased because of Brexit. Soubry and fellow Conservative remainer Nicky Morgan said they had contacted police as a result of social media harassment. Labour’s Abbott called for social media platforms like Twitter and Facebook to face fines for failing to remove abusive material. Home Secretary Amber Rudd joined the chorus of condemnation:

Everybody should be treated with tolerance, decency and respect. Which party an MP stands for, and how they choose to vote, campaign or present themselves, should not be met with vitriolic and disgusting messages

Yet online abuse is only half of the story. As the debate progressed, both Harriet Harman and Yvette Cooper from the Labour benches requested that the government directly condemn The Daily Mail for recent vitriolic headlines. No such condemnation was forthcoming.

As the debate drew to a close, speaker of the house John Bercow expressed his thoughts:

"You are never mutineers, never traitors, never malcontents, never enemies of the people" – the Speaker's message to MPs after hearing stories of online abuse. pic.twitter.com/0uU5bfGXK9

Like the government front bench before him, Bercow did not name The Daily Mail directly. But his choice of words was pointed. “Malcontents”, “traitors”, and “enemies of the people” are all phrases from recent Daily Mail front pages describing public figures the paper accuses of blocking its vision of Brexit. 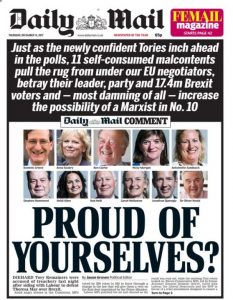 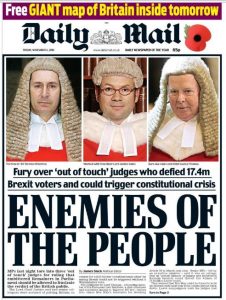 “Mutineers”, meanwhile, appeared on the front page of The Daily Telegraph. Rather than criticising the easy target of online sources, Bercow had instead attacked the right-wing press.

Faced with Bercow’s stinging rebuke, The Mail offered a response. But an apology was not forthcoming. The Mail said it was committed to “tackling this menace”. With a strange lack of self awareness, The Mail‘s spokesman continued:

No one has been more outspoken than the Daily Mail in condemning the viciousness of social media, and in particular the threats and abuse directed at politicians of all parties

Online, many were quick to point out the disconnection and call out Mail editor Paul Dacre:

He's absolutely right and perhaps MPs should summon Paul Dacre to point this out to him.

John Bercow should be commended for doing what the government failed to do. If public abuse is to be tackled, it is not enough to clamp down on social media platforms. The Daily Mail and its ilk are some of the worst offenders, and they must be reined in.