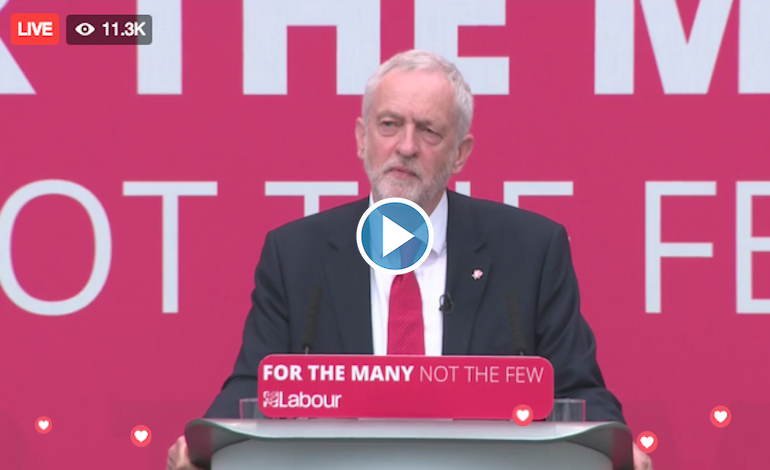 On Monday 15 May, Theresa May’s first live-streamed interview on Facebook was met with derision and a deluge of ‘angry face’ emojis. One day later, Jeremy Corbyn live-streamed the launch of the Labour Party manifesto, and the people of Facebook love-bombed him.

The Prime Minister’s Facebook Live Q&A session on 15 May did not go well. She lied repeatedly. The Labour leader gatecrashed her appearance. And more than 13,000 Facebook users responded to her broadcast with ‘angry face’ emojis.

But when Corbyn’s launch of the Labour Party manifesto was live-streamed from the University of Bradford on 16 May, he received a very different response. More than 20,000 Facebook users love-bombed the Labour leader’s broadcast with ‘loves’ and ‘likes’.

And if the Conservative campaign went looking for solace in the comments, it wouldn’t have had much luck there either. Here are the top five comments on May’s broadcast:

Compare these to the top five comments on Corbyn’s:

Facebook users were responding to two very different broadcasts. One, obviously, was a manifesto launch. And the other was an interview. But the differences went way deeper than that. While the PM shielded herself from the public by using Robert Peston as an intermediary, Corbyn invited members of the public onstage to share his platform. While May retreated into subterfuge and spin, Corbyn relied on substance.

That substance was a “radical and responsible” manifesto, the leaked version of which had already proven extremely popular with voters. In his speech, the Labour leader ruled out rises on VAT and National Insurance and on income tax for all but the richest 5% of high earners, and pledged to:

And that was just for starters. The manifesto [pdf] also pledges to:

A blueprint for Britain

The manifesto is a blueprint for a very different kind of Britain from the one we have endured over recent decades: a country which takes care of all of its inhabitants – and pays for it by increasing taxes only for the very richest, who have benefited at the expense of ordinary people under successive Conservative governments.

The establishment media were predictably unimpressed. It took Laura Kuenssberg minutes to misrepresent Labour’s proposals on tax increases for the wealthiest.

But the recent love-bombing of Corbyn – on Facebook and on the streets – tells a very different story from the one being peddled by the mainstream media. Facebook ‘loves’ and packed rallies don’t necessarily translate into electoral success. They do show, however, that despite a sustained media smear campaign against Corbyn, there is a hunger for his vision of a fairer, more progressive Britain. And on 8 June, for the first time in many decades, voters will be offered a real choice at the ballot box. It’s an opportunity we cannot afford to waste.

You can watch the full manifesto launch here:

– If you want to vote tactically to keep the Conservatives out, sign up to the Progressive Alliance and find out how to build a progressive majority in your constituency.

– Are you being targeted by Facebook adverts by political parties? Tell ‘Who Targets Me?‘