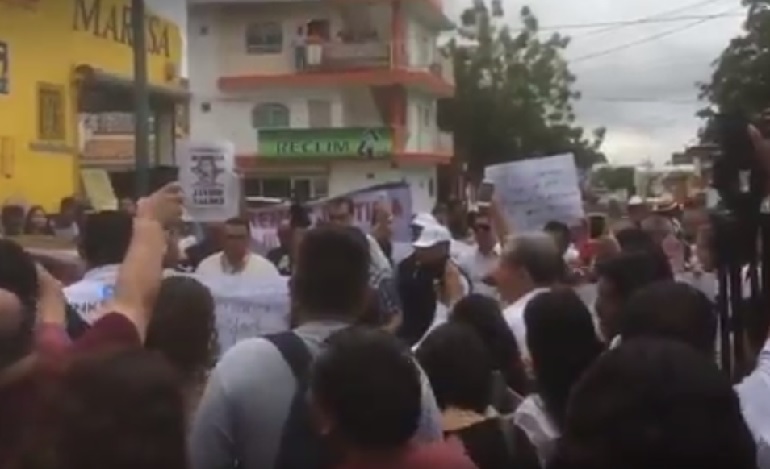 A number of Mexican journalists went on strike on 16 May, after the murder of yet another fellow journalist. He was the sixth to be killed so far this year. Reporters Without Borders responded by saying:

This makes Mexico the world’s deadliest country for the media.

One of Mexico’s most experienced and respected journalists to have covered Mexico’s drug wars – Javier Valdez Cárdenas – was murdered on 15 May. He was shot 12 times outside the offices of Río Doce, the newspaper he founded and edited in Sinaloa – a state plagued by drug-related violence.

Several media outlets, including online news site Animal Político, decided to go on strike in response to Valdez’s murder – as part of a ‘day without journalism’. Some international outlets also followed suit. Animal Político tweeted [Spanish] that this was “a minimum show of solidarity” with the journalists killed in Mexico so far in 2017. Mainstream newspapers like Reforma and La Jornada, meanwhile, openly criticised the state of free speech in Mexico.

Mexico is marking #UnDiaSinPeriodismo after one of its most influential drug war reporters, Javier Valdez, was shot and killed yesterday: pic.twitter.com/v10FneoEav

The Mexican government claims that a special prosecutor’s office for crimes against freedom of expression will investigate the killing. From 2010 to 2016, however, this office secured just three jail sentences from 798 complaints of aggression against journalists. And with an impunity rate of 99.7%, many journalists have little faith in the government’s commitment to protecting them.

The dangers of reporting in Mexico

In the state of Jalisco, meanwhile, gunmen also attacked an executive from the Semanario Costeño magazine on 15 May. Reporter Jonathan Rodríguez Córdova was killed in the attack. And just hours before the murders of Valdez and Rodríguez, around 100 gunmen had abducted seven journalists in the state of Guerrero. They stole their equipment, but eventually released the prisoners.

Over 100 journalists have been murdered in Mexico since 2000. And Vice News notes that journalists reporting on uncomfortable truths in the country are regularly subject to “assaults, intimidation and even death”. The Guardian, meanwhile, says that many of these journalists now seek to work secretly, online, and remotely in order to avoid the risks involved in just doing their jobs.

The UK-based International Institute for Strategic Studies (IISS) has called Mexico the second-most-violent country in the world (second only to Syria) in its Armed Conflict Survey 2017. The thinktank notes the 23,000 murders in 2016, and a 22.8% increase in crime over the last year in spite of previous government promises to tackle the problem. Mexico’s Foreign and Interior Ministries said it was “irresponsible and incorrect” for the IISS to describe Mexico’s violence as an “armed conflict”.

An environment of impunity

According to one recent poll, 39% of Mexicans think that drug cartels run the country, while only 28% believe the president does.

But it’s not only drug gangs involved in violence. There are also numerous cases which reveal what Al Jazeera has called “an apparent culture of impunity that allows some in Mexican law enforcement to detain and kill at will”. Amnesty International’s 2016/2017 report on Mexico reflected this reality, saying:

There continued to be reports of torture and other ill-treatment, enforced disappearances, extrajudicial executions and arbitrary detentions. Impunity persisted for human rights violations and crimes under international law…

In short, there’s a whole environment of impunity in Mexico. And with the country’s drug wars rumbling on with little meaningful action taken to stop them, it’s hard to say there’ll be justice for the victims any time soon.