Argentina cancels match against Israel. It's time for others to step up too. - The Canary 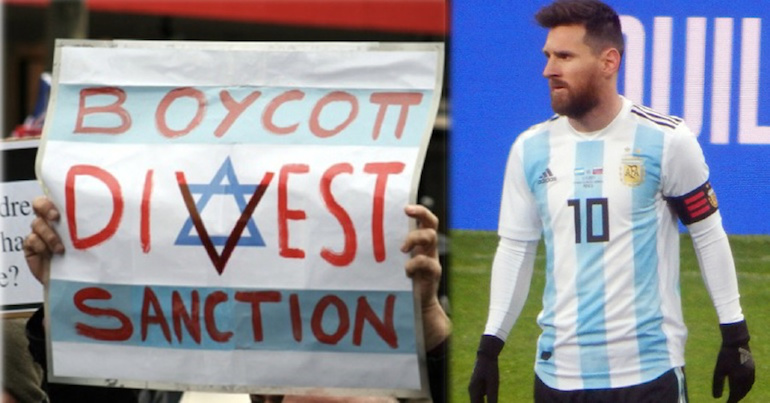 Argentina’s football team has cancelled an upcoming ‘friendly’ match against Israel, after pressure from Palestinian campaigners.

In the wake of Israel’s recent massacre of protesters in Gaza, it’s now time for other high-profile teams and figures to step up too.

On 5 June, news broke that Argentina had cancelled a match against Israel which was due to take place in Jerusalem on Saturday 9 June. And reports confirmed [Spanish] that the Argentinian team was now looking for a new opponent.

BREAKING: We welcome news that @Argentina's "friendly" football match with Israel has been canceled! The team responded to creative campaigning from fans around the world denouncing Israel’s sports-washing of its crimes against Palestinians. @FIFAcom: Take note! #NothingFriendly pic.twitter.com/9ZdFYy32ke

Thank you! @Argentina cancels "friendly" match with Israel. #ArgentinaNotGoing! Striker Gonzalo "Pipa" Higuaín says, "Not going was the right thing to do." Good luck at the #WorldCup. pic.twitter.com/CBwtEKWVj2

Nothing ‘friendly’ about it

The cancellation came after significant public opposition in the wake of Israel’s massacre of at least 60 Palestinian protesters in Gaza on 14 May. The UN Human Rights Council voted to investigate violations of international law in Gaza, suggesting Israel’s actions were “wholly disproportionate”.

The Palestinian Campaign for the Academic and Cultural Boycott of Israel (PACBI) is integral in leading the Boycott, Divestment, Sanctions (BDS) movement, which is a “Palestinian-led movement for freedom, justice and equality” that “urges action to pressure Israel to comply with international law”. And PACBI spearheaded coverage of the Argentina-related protests on social media:

The Palestinian Football Association, meanwhile, called on Argentina to cancel the match. And PACBI insisted that there was ‘nothing friendly‘ about playing in a country that had just massacred dozens of Palestinian protesters:

Campaigners also directed particular attention towards Argentina’s superstar Lionel Messi – a UNICEF Goodwill Ambassador since 2010. This position, some said, was clearly at odds with Israel’s recent violence – especially as children and a baby were among the dead and injured.

In the name of all Palestinians massacred on daily basis, please @Argentina don't play with apartheid #Israel#ArgentinaNoVayas #BDS pic.twitter.com/CLVjnX7TtJ

Time for others to step up, too

But campaigners haven’t just been focusing on Argentina. They’ve been calling on musicians to stop performing in Israel too. And recently, Messi’s fellow UNICEF Goodwill Ambassador Shakira also decided to cancel an upcoming concert after significant public pressure.

As The Canary recently reported, however, there are still a number of musicians planning to perform in Israel this year. These include:

And while Israel’s football team didn’t qualify for this year’s world cup, it is set to play against Northern Ireland in September.

In other words, people who want justice for Palestinians can still do so much more. They can call on both Northern Ireland and the musicians above to join the ongoing cultural boycott against the Israeli state. And this is important because, as PACBI has explained, “Israel overtly uses culture as a form of propaganda to whitewash or justify its regime of occupation, settler-colonialism and apartheid over the Palestinian people”.

So if you agree that Israel’s occupying forces must comply with international law and stop violating the human rights of Palestinian civilians, you know what to do.

– You may also want to send messages (on Twitter, Instagram, and Facebook) to both the Northern Irish football team and the musicians on the list above asking them not to participate in the Israeli state’s propaganda efforts.