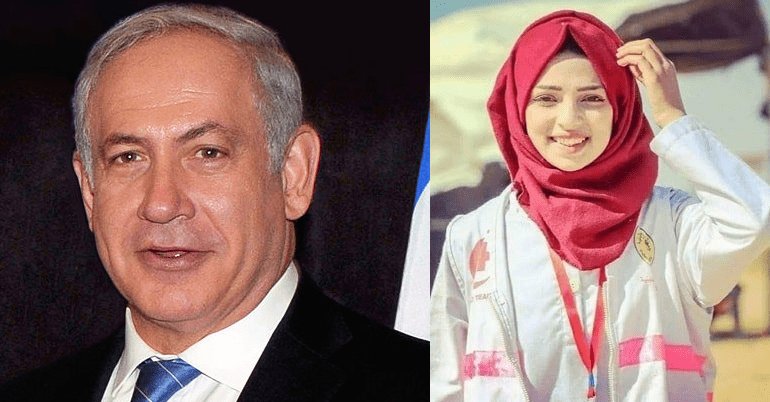 Israel’s government has raised the middle finger to the family of deceased Palestinian medic Razan al-Najjar. On 1 June, an Israeli sniper killed the 21-year-old paramedic as she tried to help a wounded person.

But now, Israel’s military has also killed Razan’s cousin and neighbour Ramzi al-Najjar. The Israeli army is keeping Ramzi’s body and refusing to send it back to the family, according to local Palestinian media. The Israel Defense Forces (IDF) say that’s because Ramzi was carrying an axe and attempting to breach the border fence in southern Gaza.

Ramzi’s sister said that she was “saddened and angered” by Razan’s death. Thousands gathered for the funeral of the young paramedic, as prayers spilled out into the streets and surrounding buildings.

For two months, Palestinians have been protesting the conditions in occupied Gaza, where less than 4% of water is drinkable. The Great March of Return also marks the 70th anniversary of the establishment of Israel, when 750,000 Arabs were forced out of Palestine.

Israel has responded with force, killing 123 Palestinians, including 13 children, since the protests began on 30 March. Over the same period, the IDF has injured a further 13,672 Palestinians.

Razan al-Najjar is far from the only medic the IDF has shot. In a single day in May, Israeli forces shot and injured 18 “clearly marked” paramedics with live fire. Of those 18, the IDF killed Mousa Jaber Abu Hassanein. Under the Geneva Convention, it’s a war crime to harm unarmed medics wearing distinctive identification signs.

Israeli soldiers are killing medics, journalists and protesters with apparent impunity. Rather than punishing the Israeli government through measures such as sanctions, the UK is strengthening ties with the hardline administration. An administration whose military has now killed both Ramzi and Razan al-Najjar, along with many other Palestinians, and which refused to send back Ramzi’s body to his family.

Our government is appeasing such Israeli state violence. We cannot stand by and allow it.

– Appreciate the work we do at The Canary? Then please consider supporting us.