'Potential war crimes': A report by Amnesty International is damning of the UK's involvement in Syria. - The Canary 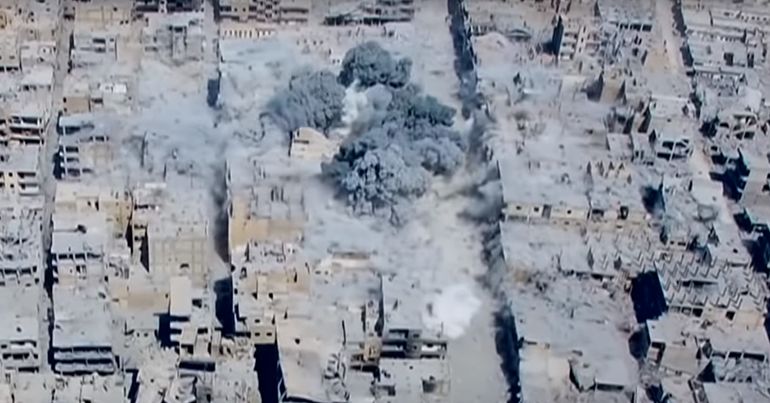 Amnesty International has issued a report calling for the UK to “come clean” regarding its role in air strikes on Raqqa, Syria. The report says there is evidence that coalition air strikes on the region between June and October 2017 were “potential war crimes”.

Unfortunately, given this government’s terrible record, these latest allegations should not come as a surprise.

several Coalition attacks which killed and injured civilians violated international humanitarian law… Coalition forces did not take adequate account of civilians present in the city and failed to take the precautions necessary to minimise harm to civilians and civilian objects.

The charity alleges that hundreds of civilians were killed due to coalition air strikes on the city.

The first thing that I saw when I went to the collapsed building was my brother – Mohammed Mahmoud Othman [50]. He was dead. Then I saw his son, 17-year-old Mahmoud, trapped under a pillar. We tried but we couldn’t drag the pillar off him. Then I saw his 12-year-old brother Anas, who was dead. I couldn’t see their sister Amal, 13, but I could hear her. My brother’s wife Fatima was in there as well. I didn’t see her but later we dug out her body and buried her.

The UK was responsible for many of the air strikes on the Raqqa region, evidenced by the government’s own list of RAF air strikes from June to October 2017. The UN has now declared 80% of the city uninhabitable, while the group Airwars goes way beyond Amnesty and estimates that coalition air strikes have caused 1,400 civilian deaths.

Amnesty’s report describes how coalition forces used [pdf, p8] “wide-area effect munitions which could be expected to destroy the buildings”. This is despite evidence around civilian survival strategies indicating [pdf, p7] that people are likely to congregate in homes and shelters. The report concludes [pdf, p8] that:

Had Coalition forces conducted rigorous surveillance prior to the strikes, they would have been aware of their presence.

Its record speaks for itself

Responding to Amnesty’s report, a Ministry of Defence spokesman said:

Keeping Britain safe from the threat of terrorism is the objective of this campaign and throughout we have been open and transparent, detailing each of our nearly 1,700 strikes, facilitating operational briefings and confirming when a civilian casualty had taken place. We do everything we can to minimize the risk to civilian life through our rigorous targeting processes and the professionalism of the RAF crews.

But this government’s record makes a mockery of the above statement. It’s a record that includes continuing to sell arms to Saudi Arabia, despite repeated reports of the civilian casualties caused by the Saudi-led coalition’s attacks on Yemen; reports that RAF bombs have killed civilians in Iraq in 2018; and selling arms to a Turkish regime accused of war crimes and multiple human rights violations.

Civilians in Raqqa have suffered grievously at the hands of IS [Daesh (Isis/Isil)], but they’ve also been imperilled by the coalition’s disproportionate aerial attacks.

These attacks have contributed to a city in ruins. Surely it’s time to re-evaluate the strategy of ‘bomb first, ask questions later’.

– Demand an end to attacks. Write to Theresa May and your MP.