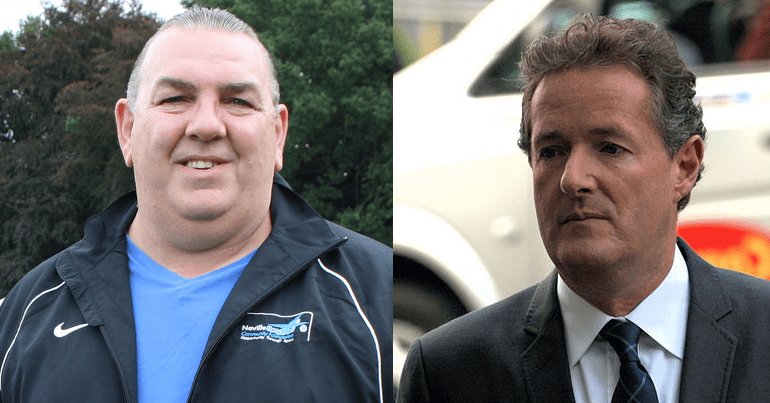 “It reminds me of Piers Morgan”

The takedown came after Morgan attacked Raheem Stirling for a tattoo of a machine gun which the midfielder has on his leg. Speaking about the row to the Guardian, Southall said:

That was brought up by some prick

Piers Morgan is a prick. What gives him the right to say what can be on your body? If Sterling had tattooed a massive cock on his leg I would say: ‘It reminds me of Piers Morgan’.

On social media, people were delighted:

"Piers Morgan is a prick. What gives him the right to say what can be on your body? If Sterling had tattooed a massive cock on his leg I would say… :‘It reminds me of Piers Morgan.’”

What a fucking legend😂😂 pic.twitter.com/xaEuNS5Kth

The attack seems to have riled Morgan, who retorted that Southall “wasn’t good enough to clean David Seaman’s gloves”.

Human rights and the world cup

In the Guardian interview, Southall also slammed the location of the upcoming world cup:

It’s in the wrong country. Why would you go to a country where human rights are shit? Where homophobia is horrendous. England should have sent the LGBT team to represent them. Fuck Putin. ‘Here’s our gay team. What are you going to do now?’ Or they should send an all black team, just to annoy Putin.”

Ignoring human rights seems to be a theme at FIFA. Qatar is currently building its 2022 world cup infrastructure on the back of slave labour. Many of the exploited workers are dying, despite Qatar being one of the world’s richest countries.

Southall has become a highly-lauded presence on social media, championing the human rights of minorities. His unforgiving takedown of Piers Morgan is quite frankly hilarious. Top job.

– Sign the petition to revoke the right for Qatar to hold the world cup.