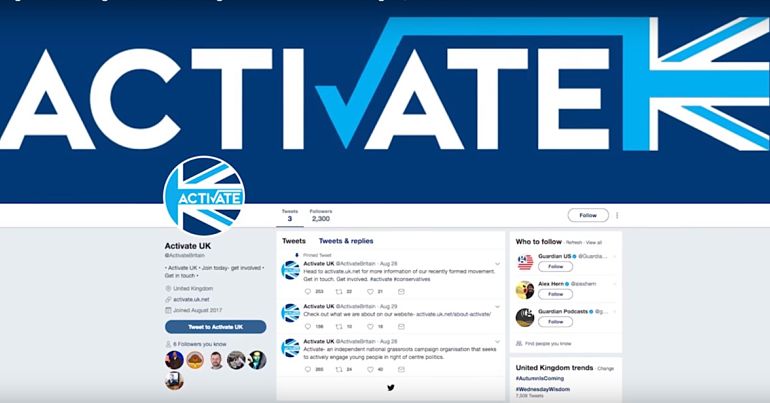 Activate, the Conservative Party’s answer to Momentum, has shut down less than two months after its official launch party and ten months after it first appeared on social media.

But let’s not let our anguish tarnish its legacy. Let’s remember the good times.

Gone but not forgotten

Activate was set up to achieve an almost impossible goal: to “engage young people with conservatism”. Some may say, like Boris Johnson’s principles, it was doomed from the start. The group was eventually deactivated due to key members not having time to run it, with others also citing the “stigma” it had developed.

It's always good to start the day with some positive news, so let's see if this helps. The Tory youth group set up to rival Momentum, Activate Britain, have decided to call it a day. I suppose it is a bit of a shame. It was quite good for a parody account.

It’s safe to say that Activate did not get off to the best of starts. Here is its first tweet:

The reaction was not overly encouraging:

This is the worst meme
I have ever seen…

However, the real hilarity wasn’t in the group’s shoddy meme skills. It was the fact that they inadvertently created an advert for Jeremy Corbyn:

#ActivateUK launches tonight with a meme that appears on mobiles as a blue advert for Jeremy Corbyn… pic.twitter.com/B2lpK1smNL

Despite repeated gaffes and controversies, Activate soldiered blindly on like Katie Hopkins in a k-hole. In April 2018, it held its official launch party in Whitechapel, East London.

However, an undercover Vice journalist snaffled a ticket and reported back on some bleak scenes:

Despite the best efforts of Activate’s digital marketing meme machine, only 28 people turned up to the launch event, including four Tory councillors, two undercover reporters and two women under the age of 50. The group had booked a room for 150 people, so attendees congregated awkwardly around the free prosecco.

He also found a movement that was completely devoid of ideas:

What I found was an organisation with under 1,000 members, focused on personal career development and social media marketing rather than grassroots activism or discussing which policies might make the world better.

Activate attempted to dispute Vice’s claims. The director of campaigning, Sam Ancliff, emailed Vice arguing that there were 36 people present at the meeting rather than 28.

Young Tories calling for "chavs" to be gassed. Where's the national outrage? NEW VIDEO on the Tory bigotry problem > https://t.co/08b97eKL5K

Activate attempted to distance themselves from these allegations, claiming the posts “did not originate from Activate or any of our members”. But messages seen by The Canary proved this to be untrue.

Activate’s task, to generate support among young people for an economic order that is actively working against them, was always going to be a tall order. But it took real skill to fail quite as spectacularly as it did.

Still, thanks for the memories guys.