Theresa May was cheered at PMQs today, just not in quite the way she’d like - The Canary 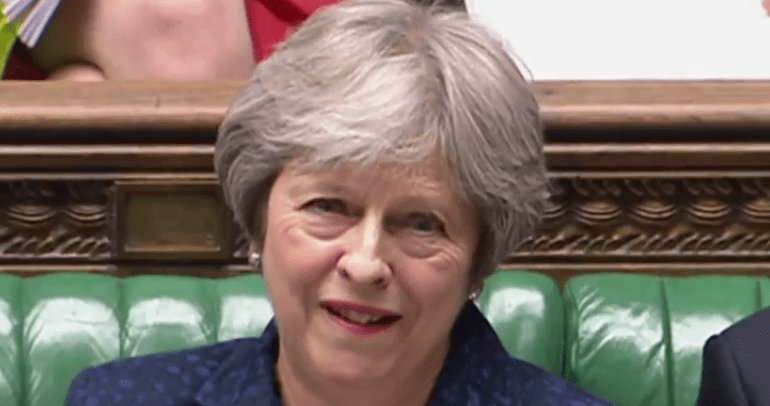 The opposition benches cheered Theresa May at Prime Minister’s Questions (PMQs) on 6 June. But the congratulations were not quite what she was looking for. As usual, the prime minister was failing to offer any answers during the debate. And this time, May took it a step further. She actually started questioning Corbyn:

Theresa May: "When will he answer my question?"
Jeremy Corbyn: "You're meant to answer the questions, not ask them"
Theresa May: "I didn't ask a question!"

Really, she really said that
It's beyond a joke, May is a national embarrassment. #PMQs

When May finally gave a straight answer, the Labour benches cheered her on.

How it played out

It didn’t take long for May to turn the parliamentary session into a farce. The PM decided to ask Jeremy Corbyn a question only a few minutes in, suggesting he should do:

what he refused to do two or three weeks ago in this chamber, which is to stand up and rule out a second referendum.

This was met with ridicule from the Labour leader:

May then retorted by denying she’d ever asked a question in the first place:

I didn’t ask him a question. I simply suggested that he could stand up and say what the Labour Party policy was on a second referendum

But Corbyn was ready:

It’s not the opposition that are conducting the negotiations… but very sadly, Mr Speaker, it’s not the government either.

Towards the end, May finally gave a straight answer. Corbyn asked whether it remains her plan to leave the EU in March 2019 and complete the transition by December 2020. May said:

The Labour benches cheered her on for answering a question at last.

“Refuses to perform that basic function of being Prime Minister”

The reaction across the political spectrum doesn’t bode well for May. Even the Sun branded the session “one of [Corbyn’s] strongest showings yet”.

And Labour MPs on the right of the party agreed:

I think after that performance, Jeremy Corbyn doesn’t need any advice on how to do #PMQs from Ian Blackford…

V good again by JC at #PMQs, putting May on the back foot on Tory #Brexitshambles. Shows value of focusing on *the* existential issue facing our country.

Theresa May is supposed to be the one answering questions – yet she refuses to perform that basic function of being Prime Minister. Pathetic politics. #PMQs

Jeremy Corbyn is right to remind the Prime Minister that it is her government negotiating Brexit, not the Labour Party. Also an important contribution from @lloyd_rm highlighting the tragic suicide rate amongst young people and the ongoing mental health crisis that we face #PMQs

Is Theresa May aware that Jeremy Corbyn doesn't answer the questions? Utterly ludicrous from the Prime Minister. #PMQs

Which will last longer, the Northern Rail franchise or her premiership?

With a performance like that, it’s a fair question.

Who wants to see all the best bits from #PMQs in a 2 minute video?