Shakira’s on the right side of history after cancelling her Israel gig. Now other artists must follow. - The Canary 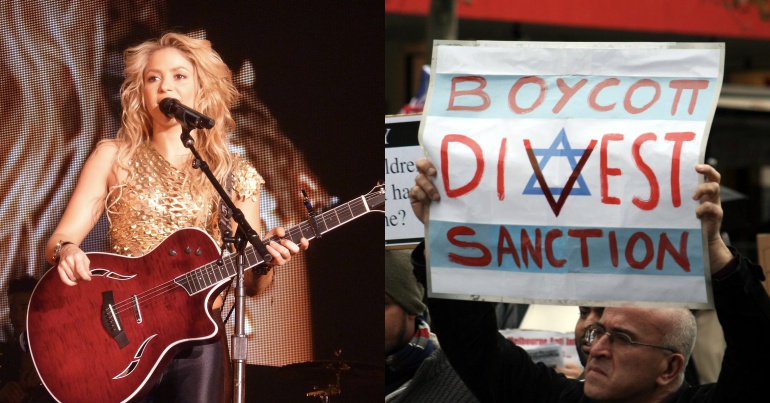 Colombian superstar Shakira has reportedly cancelled an upcoming gig in Israel. This follows pressure from Palestinian and international activists. And after Israel’s recent massacre of protesters in Gaza, Shakira’s move is significant.

But many more international musicians have 2018 gigs in Israel. So further pressure could encourage them to cancel too.

On 14 May, Israeli troops killed at least 60 Palestinian protesters. The extent of the violence was so great that the UN Human Rights Council (UNHRC) voted to investigate violations of international law in Gaza. It suggested Israel’s actions were “wholly disproportionate”.

In addition to the deaths, over 2,400 people were injured as the Israel Defense Forces (IDF) opened fire. Children and a baby were among the dead and injured.

In 2003, Shakira became a UNICEF Goodwill Ambassador. Following her appointment, she said she wanted to “contribute to improving the lives and futures of children”. However, her UNICEF position was clearly at odds with Israel’s recent violence. So the Palestinian Campaign for the Academic and Cultural Boycott of Israel (PACBI) led the call for her to cancel her upcoming gig. Hundreds of organisations signed an open letter to the singer.

PACBI is integral in leading the Boycott, Divestment, Sanctions (BDS) movement. BDS is a:

a Palestinian-led movement for freedom, justice and equality. BDS upholds the simple principle that Palestinians are entitled to the same rights as the rest of humanity.

We welcome news that Shakira will not be performing in Tel Aviv, dashing Israel’s hopes to use her name to art-wash its latest massacre in Gaza. Artists, especially UN Goodwill Ambassadors, have a moral duty not to be complicit in covering up human rights violations & apartheid. pic.twitter.com/Mbhnvm609f

Colombian singer Shakira cancels her performance in Tel Aviv in response to Israel's massacre of peaceful protesters in Gaza.

According to Israel21c, other “must-see concerts in Israel” this year include:

These artists must join the ongoing cultural boycott and refuse to play these gigs. Because this matters. It matters a lot.

So when international artists perform in Israel, they are complicit in this propaganda because:

they help to create the false impression that Israel is a “normal” country like any other. The absolute majority of Palestinian writers, artists and cultural centers have [also] endorsed the cultural boycott of Israel.

As The Canary previously reported, filmmaker Ken Loach spoke out about Radiohead’s 2017 gig in Israel. They played despite widespread condemnation. As did Nick Cave. But as Dazed reported:

Many musicians have supported the cultural boycott. Scheduled concerts from Lauryn Hill to the late Gil Scott-Heron have all been axed in the past.

There is no doubt that the Israeli government does use these gigs as a propaganda tool. In fact, this even has a name: hasbara. According to Haaretz, Hasbara is:

a Hebrew word that is part “government efforts to explain policy” and part “propaganda”.

Israeli organisations quickly responded to Shakira’s refusal to play by claiming that her gig was never actually confirmed. The organisers, Live Nation, tweeted:

The media has incorrectly reported that Shakira will be performing in Tel Aviv this summer. While no dates this summer will work, Shakira and Live Nation hope to bring a show to her fans in Israel in the future.

But the PACBI timeline of events suggests that this is simply not the case. And many have taken to social media to call this out:

Entering damage control mode after Shakira nixed her July 9th Tel Aviv gig, Israel’s spin machine claimed the gig was never scheduled to begin with. Then, they said it wasn’t cancelled, it was just postponed.https://t.co/sfoGaNv4ZH

As someone else said, ‘the hips don’t lie’, but:

The situation for people in occupied Palestine is horrific. But those living in Gaza are also under siege in what many call an open-air prison. As Haidar Eid, a professor at Al-Aqsa University said:

When Israel is not sniping us down or bombing us, it exerts great effort to ensure that we live in subhuman conditions under siege in Gaza. We get electricity for only 4 hours a day, 95 percent of our water is undrinkable, and our seriously ill wither away as they wait for months for a permit to get treatment in the West Bank.

So it’s crucial that international musicians support the cultural boycott. Otherwise, they play straight into the propaganda of a despicable government.

Shakira listened to her fans and said no to Israel. And she’s on the right side of history for doing so.

Now, it’s time for others to step up.