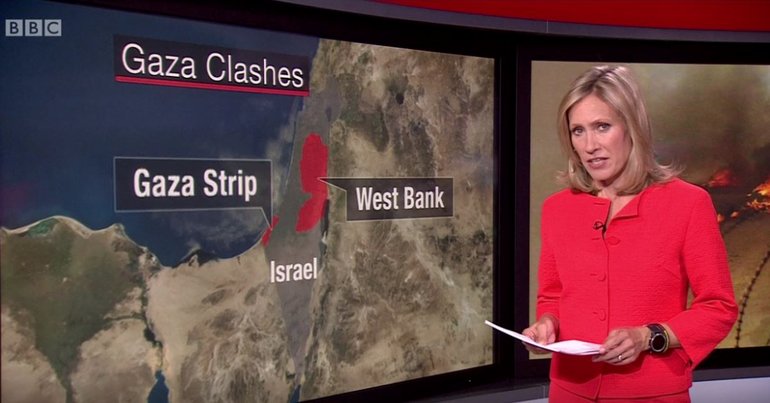 By 10am on 15 May, Israeli snipers had killed 59 Palestinians and shot more than 2,200. Perched atop the apartheid wall which Israel built around Gaza (imprisoning its 1.9 million inhabitants), the snipers fired into crowds indiscriminately. But the BBC did not report this as a massacre. This decision should shame the BBC for as long as it exists.

Gaza residents live behind a giant apartheid wall. Israel built the wall, and Israeli armed forces guard it. I’ve been through the Erez Crossing into Gaza several times, most recently in 2014 when I travelled to cover Israel’s bloody Operation Protective Edge. It’s not a border fence. It’s the entrance to a maximum security prison. And Israel decides who enters and leaves.

On 14 May, Palestinians marched towards the wall, as if marching home from their decades of exile in Gaza. It’s now 70 years since Israeli militia ethnically cleansed the area of much of its Muslim population. As Al Jazeera reports:

Between 1947 and 1949, at least 750,000 Palestinians from a 1.9 million population were made refugees beyond the borders of the state. Zionist forces had taken more than 78 percent of historic Palestine, ethnically cleansed and destroyed about 530 villages and cities, and killed about 15,000 Palestinians in a series of mass atrocities, including more than 70 massacres.

Many of the Palestinians forced from their homes in 1948 ended up in Gaza and the West Bank. And since then, Israel has continued to step up its occupation. Israel’s apartheid wall doesn’t just surround Gaza, it separates village from village across the West Bank. It creates complete Israeli control of both areas, and makes talk of a two-state solution a fool’s promise. There is no Palestine today, there is no border. There is only Israel, and populations of Palestinian people collectively imprisoned behind the apartheid wall.

Israeli snipers opened fire on the Gaza marchers. With nowhere to run, casualties and fatalities were certain. Those killed included women, children, elderly people, and journalists. As Amnesty International commented in a statement condemning the massacre:

Early medical reports from Gaza today indicate that dozens of people have been shot in the head or chest. Amnesty International last month documented research from the Gaza Strip that showed the Israeli military were killing and maiming demonstrators who pose no imminent threat to them.

The scenes bring to mind apartheid South Africa’s 1960 Sharpeville massacre, in which white police massacred dozens of black protesters. And the cover story is similar too.

"Oh people, my son "
A Palestinian father is crying in farewell of his little son , who has been killed by Israel in #Gaza today
Heartbreaking 💔#Nakba70 pic.twitter.com/uUEsqMmxyx

(Pictures taken at the same time this afternoon) pic.twitter.com/0ySzaGjQC9

The BBC and other Western media outlets dutifully regurgitated Israeli propaganda. They wrote of “clashes” at the “border”. They made it sound as if Palestinians had invaded Israel, and that Israel was merely defending itself from the siege. No mention of the wall, or the decade-long Israeli blockade which has created a humanitarian crisis in Gaza. And no mention of international law. Because Israel is occupying Palestinian land illegally.

Israel does not have the right to ‘self-defence’ as the agitator and occupier. But the Palestinian people do have a right to armed resistance in response to illegal occupation.

None of this made it into the BBC‘s reports. Media Lens kept a sharp eye on the BBC as the protesters were slain, pointing out the misleading nature of its coverage.

Tell the truth, @BBCNews. Stop using the pro-Israel propaganda term, 'Gaza Clashes', and call it what it is: 'Gaza Massacre' pic.twitter.com/IEjbyJzy4n

Today, @BBCNews has utterly disgraced itself over the massacre of 55 Palestinians by Israeli forces. Headline after headline on the top page of its website has masked the truth. And now it leads with 'Israel defends…' What an abomination. pic.twitter.com/Ap42WA7bGh

Like they're suggesting it's the protesters who are instigating violence, rather than the occupying forces shooting them in the back and in the head: pic.twitter.com/WBGRdWDf7a

It wasn’t just the BBC.

The Independent's version: 'In Jerusalem, an embassy opens. In Gaza, at least 58 die on bloodiest day in years'

What a mindless, heartless herd they arehttps://t.co/farWq10yqq

this one's got it all:

"death toll rises" — no one was killed and no one specific party did the killing, the death toll just mysteriously "rises"
"clashes" — launders all power asymmetry
"2,400 people have been injured" — all 2,400 are Palestinian but lets go with "people" https://t.co/7mUy6xSXIY

A victory for real media

But opponents of Israel’s illegal occupation won a key victory against this deception. In response to public pressure, the New York Times actually changed its headline.

It’s time to demand the same of the BBC.

– Let the BBC know your thoughts.