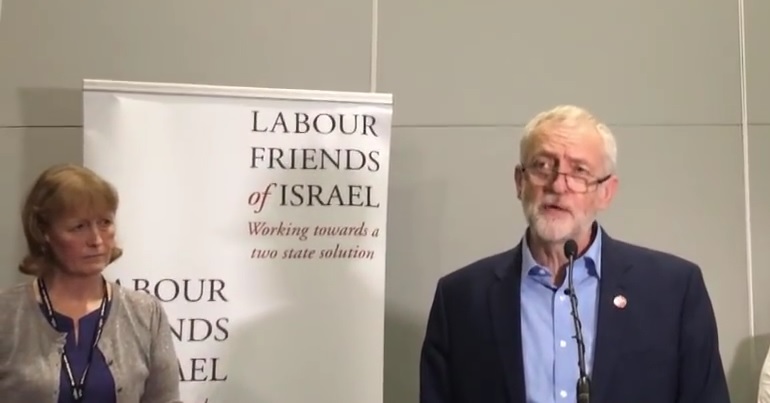 People are calling on the Labour Party to expel a pro-Israel group, Labour Friends of Israel (LFI), over its response to the Gaza killings.

Israel killed 61 Palestinians during protests on the Gaza-Israeli border on 14 May. It also injured at least 2,400 people, including more than 1,300 with live ammunition. Doctors Without Borders (MSF), whose staff are treating the victims, called the Israel Defense Forces’ (IDF) violence “unacceptable and inhuman”. The UN says the killings are an “outrageous human rights violation”.

Meanwhile, the LFI posted a statement about the situation on its Twitter account. It claimed that Hamas, Gaza’s government, was to blame for the violence.

Has @_LFI's Twitter account been hacked? This appalling victim blaming excuse for the massacre of Palestinians would surely never be posted by Labour supporters pic.twitter.com/JmgGs3AIat

Tragic events on the Gazan border; all civilian deaths are regrettable. Hamas must accept responsibility for these events. Their successful attempt to hijack peaceful protest as cover to attack Israeli border communities must be condemned by all who seek peace in the Middle East.

LFI has since deleted the tweet, after people criticised its “victim blaming”. It replaced the controversial statement with another on Twitter. The second statement also condemned Hamas, for its “cynical exploitation of peaceful protests”.

Statement from LFI on yesterday's violence on the Gazan border. pic.twitter.com/jmSFx3uqTs

LFI is an advocacy group for stronger ties between Israel and the UK’s Labour Party. There are currently over 70 Labour MPs, and a number of peers, who officially support LFI. The group also counts eight Labour MPs as its officers.

But some people are calling on the Labour Party to rethink its ties with the group following its initial statement:

This tweet from Labour Friends of Israel has now been deleted. Nonetheless as a party member the fact it was issued in the first place deeply concerns me. I ask all Labour MPs to denounce this LFI tweet & to carefully consider support for an organisation that saw fit to write it. pic.twitter.com/Cx4u3ObMO0

.@jeremycorbyn After the appalling statement today from #LabourFriendsOfIsrael when are you going to ban Labour MPs from membership of an organisation that promotes wholesale murder and the agenda of a foreign government??

A disgraceful tweet from #LabourFriendsofIsrael, representing some 80 MPs. There is clearly a stubborn complicity with murder and #occupation problem inside the #LabourParty that needs to be dealt with. pic.twitter.com/C7yGVGvX4X

Labour itself responded to the violence during the protests too. Shadow foreign secretary Emily Thornberry said:

We condemn unreservedly the Israeli government for their brutal, lethal and utterly unjustified actions on the Gaza border, and our thoughts are with all those Palestinians in Gaza whose loved ones have been killed or injured as a result.

The Labour Party appears to believe Israel bears total responsibility for the violence. It’s as yet unclear, however, whether it intends to take action against the LFI for effectively blaming the Palestinians instead.

The Canary contacted the Labour Party for comment. But none had been received by the time of publication.