As Theresa May rolls out the red carpet for a human rights abuser, protesters take to the roof - Canary 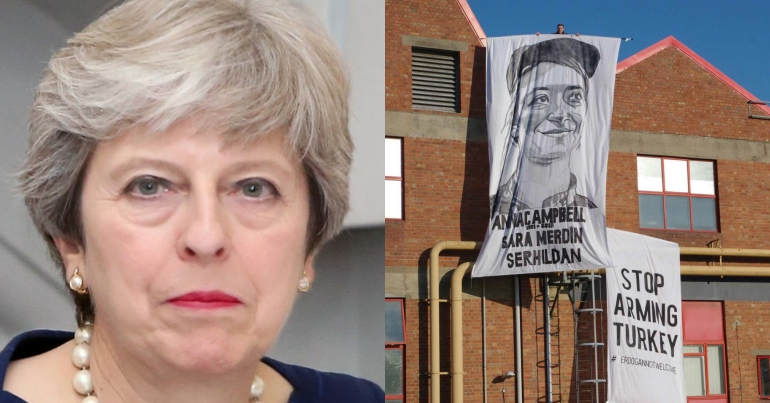 Friends of Anna Campbell, the British anti-terror fighter killed in northern Syria, have occupied the roof of an arms company. They have taken the action to protest Turkish president Recep Tayyip Erdoğan’s visit to the UK. And they have a clear message about Theresa May as she meets with Erdoğan in London:

She is complicit in the death of Anna, YPJ fighters and hundreds of Kurdish civilians. It’s simple, we have to stop arming Turkey. Now.

Protesters from Bristol Kurdish Solidarity are on the roof of Airbus in Filton, Bristol. Airbus manufactures the wing for the A400M, a multi-role transport aircraft sold to the Turkish military. Through a “Rooftop Art Installation”, they are highlighting the stories behind UK weapons sales. And they told The Canary they are hoping to spend the night on the roof.

Erdoğan in the UK

The occupation marks the third day of Erdoğan’s visit to the UK. He has already attended a lunch sponsored by arms dealers. And on 15 May, he is receiving the red-carpet treatment from both May and the Queen. As Ed Sykes wrote for The Canary:

Erdoğan is very thankful to May’s government for boosting his legitimacy just before a controversial election campaign, calling Britain “a real friend”. Because only ‘real friends’, of course, can look past things like alleged:

Stories of the arms trade

Three large banners of portraits of women from the YPJ, an all-female Kurdish-led force in northern Syria (aka Rojava), are being rotated from the roof. The banners were made by three different female artists who were all friends of Anna.

One of the portraits is of Anna, who travelled to Syria to join the YPJ in May 2017. She was reportedly killed in a Turkish airstrike on 15 March: 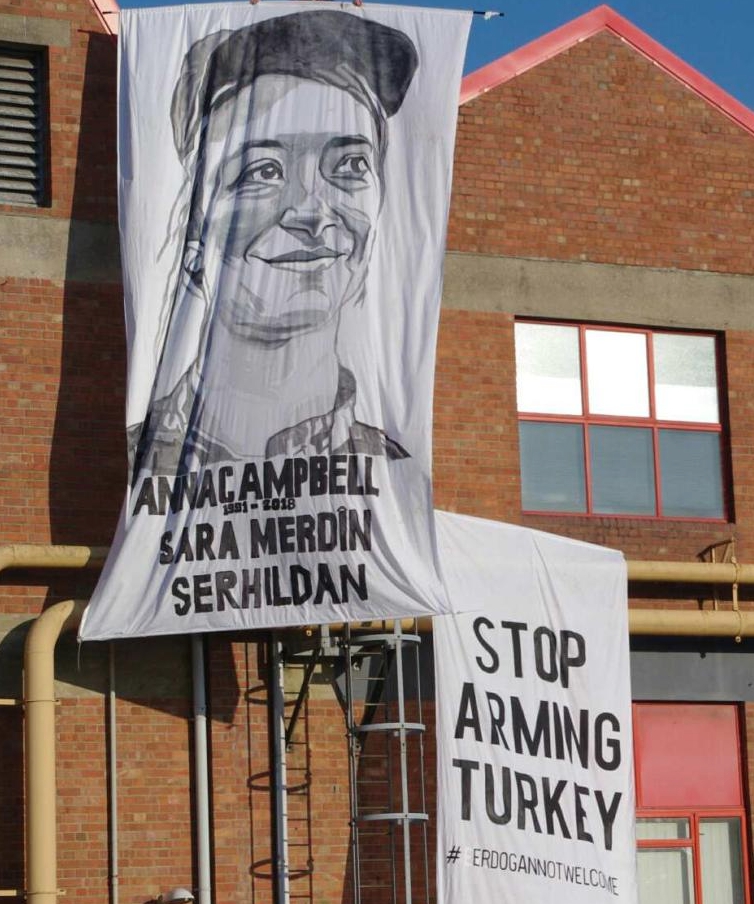 The other two women remembered on the banners are Arîn Mîrkan and Barîn Kobanê. Mîrkan was killed playing an instrumental role in the battle for the northern Syrian town of Kobane. According to ROAR magazine:

Arîn Mîrkan detonated herself in October 2014 near the strategically critical Mishtenur Hill to rescue her comrades and to capture the position from ISIS [Daesh]. This eventually shifted the battle in favor of the People’s Defense Forces (YPG/YPJ) and other co-operating armed groups, pushing ISIS onto the defensive.

Kobanê, meanwhile, was killed during the 2018 Turkish invasion of Afrin in northern Syria. According to a press release seen by The Canary:

Barîn died trying to protect civilians from Turkish mercenaries. There have been widespread reports that Turkey has been employing former ISIS and Al-Qaeda fighters on their border territories, with all the atrocities this will inevitable entail. Either way, there is graphic evidence in Barîn’s case that the Turkish soldiers who killed her hated women. They filmed themselves with her mutilated body and proudly posted the footage on social media.

One of the protesters, Liz, explained why it is so important to tell the stories of these women:

The Bristol arms industry wants to pretend that the people it kills don’t have stories. So we have brought them the face of our friend, and the heroes who inspired her. The women of the YPJ have been critical in liberating the world from ISIS, and have been repaid with betrayal. We are here to shout their names from the rooftops. Anna Campbell, Sara Merdîn, Serhildan, Arîn Mîrkan, Barîn Kobanê, we honour you and we miss you.

It is an utter disgrace that May is rolling out the red carpet for Erdoğan. It is even more despicable that the visit seems to be nothing more than an excuse to encourage the sale of yet more weapons to his regime.

The actions of these protesters and all those who’ve been opposing his visit, however, show that we can make a difference. Arms dealers have factories and offices across the country, and it is down to all of us to take action against those profiting from death and destruction.