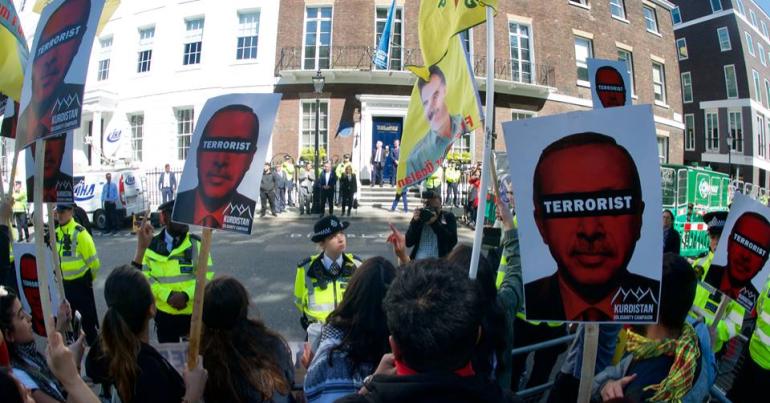 Protesters and activist groups are preparing to gather on 15 May to oppose the state visit of a leader condemned for human rights abuses.

President Recep Tayyip Erdoğan of Turkey will spend the final of his three days in the UK visiting both Queen Elizabeth II and Theresa May. But the leader, accused of breaching human rights laws and jailing hundreds of journalists, will face some committed opposition.

While this is not likely to come from within Number 10, protesters will be arriving in their hundreds to make sure their voices are heard.

Pockets of protest have already erupted during the Turkish president’s visit. Groups gathered outside Chatham House where he was delivering a speech 14 May. Protesters also managed to halt the leader’s convoy temporarily after his arrival in Britain on 13 May:

Erdoğan will meet both the queen and the prime minister during his time in the UK.

In a press release seen by The Canary, campaign group Peace in Kurdistan said the invitation “could not be more cruelly timed for the Kurds”.

It comes in the aftermath of Turkey’s unprecedented intervention in the Afrin region of northern Syria, where a democratic government was in place.

Erdoğan is also in the midst of a re-election campaign after calling a snap election in April. But groups like Peace in Kurdistan have questioned the political climate the vote will take place in.

Whilst the jailing of journalists and activists may have hit the headlines, the profound impact that Turkey’s crackdown has had on wider society is harder to quantify but it is no less real.

Despite the crackdown, the Conservative government sees Turkey as a ‘priority market’ for arms sales. On 11 May, it was revealed that the UK has licensed over $1bn worth of arms sales to Turkey since a failed coup attempt in 2016.

Opposition politicians in the UK have spoken out against both the arms sales and the state visit commencing. Green MP and co-leader Caroline Lucas said:

This week President Erdoğan of Turkey is in Britain.

❌Locking up journalists
❌Overseeing torture
❌A brutal military operation against the Kurds.

And guess what? The UK will be trying to sell him even more weapons. https://t.co/hOAekRQdV9

Figures from within Amnesty International also questioned the PM’s intentions:

The UK has sold $1bn of weapons to #Turkey since the failed coup attempt. President #Erdogan is in the UK meeting @theresa_may. But with journalists, human rights activists & tens of thousands others in jail with she raise human rights issues? #FreeTaner https://t.co/Z5kxTgKLKI

Turkey is not the only abusive administration the Conservatives have been accused of promoting arms deals with. Earlier this year, Saudi Arabia’s crown prince was also given the red-carpet treatment. And Bahrain’s dictator met with the queen in Windsor just days ago on 12 May. But that shouldn’t distract from this visit:

Erdoğan has led a vicious campaign against the Kurdish population of both Turkey and Syria. He has jailed journalists, human rights activists and opposition politicians in their thousands. In doing so, he has created a climate of fear within Turkey. But our PM is happy to roll out the red carpet and welcome him with open arms.

All sides of the fractured political landscape of this country should be coming together to oppose this.

– Kurdish solidarity groups have called for people to gather from 10am outside the gates of Downing Street. If you can, join them.