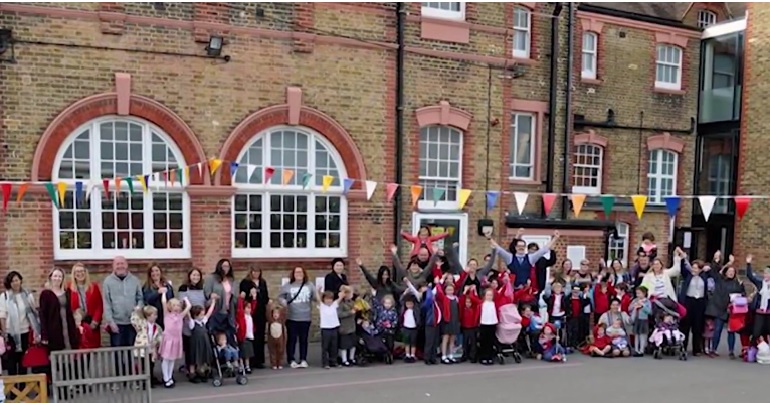 Schools just sent a very public ‘f*ck you’ to the Conservative government over cuts. A number of schools draped banners across their premises revealing how much money the cuts are costing them.

Complaints from Conservative councillors forced one school to take the banner down. But in a brilliant act of defiance, it put it right back up again.

Schools across Sefton, Merseyside, have put up the banners. Ursuline Catholic Primary School, for example, hoisted a banner that read:

According to the Liverpool Echo, there are also similar banners outside St Luke’s Primary and St Nicholas C of E Primary in the area. Schools in Brighton recently did the same:

But local Conservative councillors criticised Ursuline Catholic Primary School’s banner. The Echo reports that Simon Jamieson said its appearance was a “disgraceful politicising of children”. And Michael Pitt asked the council to remove the “outrageous” sign.

This @SchoolCuts banner highlighting £7.3m Government cuts across #Sefton schools was removed (under s2 & 4, 1986 LGA Act) from a local authority school in Blundellsands under impartiality rules after Tories complained it was political and may influence the #LocalElections2018 pic.twitter.com/Jr1JWmOhNy

The school initially took it down following the complaints. But it has now put the banner up again.

It’s not hard to see why schools are resorting to such tactics. Education secretary Damian Hinds said at the beginning of 2018:

There is more money going into our schools in this country than ever before.

But unions say there’s a real-terms funding cut to schools of £2.8bn. And headteachers of schools say the same. Jules White, headteacher of Tanbridge House school, Horsham, told the Guardian:

In spite of prolonged rhetoric from the government, headteachers from schools and academies are stating unequivocally that their budgets remain in crisis…

The crisis is making it difficult for schools to retain adequate numbers of staff. And some schools cannot afford the supplies they need, such as paper and pens. Staff are often overworked, too, which is taking a toll. As one teacher from Sefton, who asked to remain anonymous, told the Liverpool Echo:

We’re burned out and exhausted… You become a teacher for a reason, and as much as we love our jobs, it’s getting more and more stressful as time goes on.

Yet prime minister Theresa May appears to find £50m extra funding easily for her beloved grammar schools project while many non-selective schools struggle. No wonder they just raised a giant middle finger to her government.

– Find out more with the Save Our Schools campaign.

Featured image via The Latest TV/YouTube