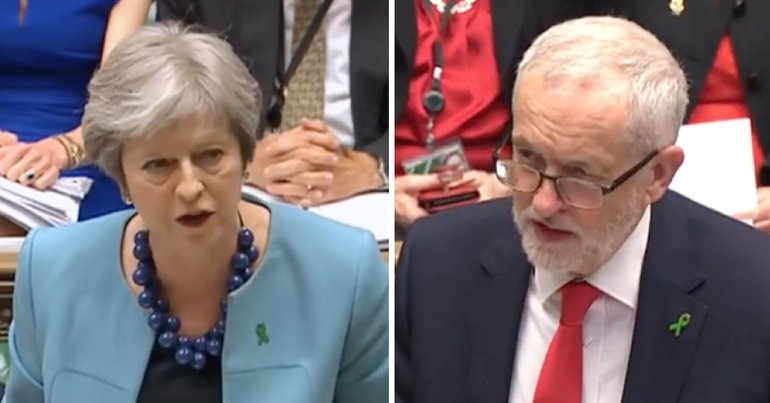 During today’s PMQs, a clearly rattled Theresa May made an embarrassing slip. And as Labour leader Jeremy Corbyn pointed out, maybe it’s time she stepped aside and let someone else get this job done.

Customs union. These two fairly dull words are keeping Theresa May awake at night right now. Both of her party’s plans have already been ruled out by European negotiators. This means that, months away from leaving the EU, the PM can’t tell businesses or anyone else how UK-EU trade will work once we do. The issue has now split May’s cabinet in half. Theresa May and her fellow Remainers want to thrash out a new ‘customs arrangement’. Meanwhile, hard-Brexiters see this plan as May’s effort to maintain the status quo. Deadlock.

What a farce. Cabinet fighting over 2 customs options: neither workable; neither acceptable to EU; and neither would get support in a vote in Parliament. https://t.co/lodaidOjcm

Just to make matters worse, at today’s PMQs, May made a Freudian slip that dropped a match on the powder keg. While (attempting to avoid) answering a question about her preferred post-Brexit replacement for the customs union, May accidentally said she would like to create a “customs union”.

Not noticing her slip-up, May continued on. But chancellor Philip Hammond can be seen widening his eyes in realisation before reinstalling his poker face.

Theresa May didn’t mean to say 'customs union' at #PMQs she meant 'customs arrangement' according to the Prime Minister's official spokesman pic.twitter.com/Spat3DGV6N

May’s official spokesman was quick to shut the matter down after PMQs. But given the state of Brexit negotiations, and her intransigent and divided cabinet, that’s unlikely to happen.

To make matters worse, she was facing a buoyant and united Labour front bench. Responding to her failure to negotiate even the most basic agreements with the EU, Labour leader Jeremy Corbyn demanded the PM “step aside” and let his team get the job done:

The Government is in complete disarray on Brexit and its reckless approach is putting jobs at risk.

If @Theresa_May can't negotiate a good deal, she should step aside so that Labour can. #PMQs pic.twitter.com/VRsSJ4CQ4u

With the clock ticking to Brexit, and May yet to secure a single major deal – it may well be time to listen to Mr Corbyn.